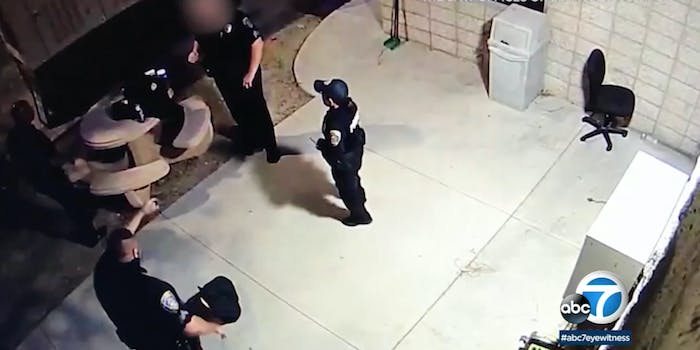 A California State University San Bernardino officer is under investigation after allegedly pulling a gun on a fellow officer during a dispute over the school’s mask mandate.

The incident occurred on school property on Sept. 15. Video surveillance footage shows four officers talking until one officer pulls his gun and points it at another officer.

The gun was pointed at the officer for approximately one second, according to footage released on KABC.

The officer who pulled the gun is a sergeant, according to the victim’s attorney, Tristan Pelayes. According to Pelayes, the sergeant was telling the other officers they had to enforce a mask mandate on campus, and the victim questioned the mandate.

“My client questioned the authority for that,” Pelayes told KABC. “For instance, if we were to arrest somebody or escort somebody off the campus, what is our legal authority for that? Apparently, that conversation led to the sergeant losing his temper, and ultimately pulling a gun on my client.”

Pelayes said his client filed an internal complaint against the sergeant and a report with San Bernardino police.

The sergeant is being investigated by the San Bernardino Police Department for brandishing a weapon, a misdemeanor charge. Pelayes is pushing for the sergeant to instead be investigated for assault with a deadly weapon, which is a felony.

“This is something officers learn early in their career. If you pull out your weapon, and especially if you point your weapon at a target, it’s because it’s the last resort,” Pelayes said. “You don’t do this because you’re joking, or you had a bad day, or because you have a temper. Because if you are that kind of officer, you should not be wearing a badge, and you certainly should not be carrying a gun.”

Pelayes’ client recorded the surveillance footage on his phone, which can be viewed on KABC.