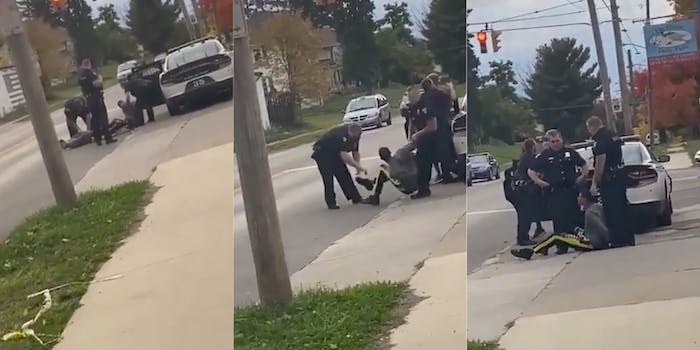 Jordan Moore dragged a minor for several feet while the teen was handcuffed and non-resistant.

Ohio police suspended an officer who dragged a handcuffed Black minor, even though the teen was not resisting orders.

Eyewitnesses recorded the incident on Oct. 12 in Mansfield, Ohio, about 80 miles southwest of Cleveland.

The teen is shown in the video walking up to the police cruiser. Officer Jordan Moore tackled the teen to the ground and dragged him around the cruiser, with the teen saying, “I’m not resisting.”

He was not charged and released to his family.

According to an ensuing investigation, Moore dragged the minor for several feet while the teen was handcuffed and non-resistant.

Police were initially called to the scene because of man, identified as Dwaine Chapman, allegedly threatened to have his dog attack his roommate.

“It was found that Officer Moore grabbed the hooded sweatshirt of a juvenile detainee without warning or instruction to comply with orders and dragged him several feet, while he was still handcuffed and in a seated position to the rear passenger side of a patrol car, in an attempt to assist the other officers with the adult arrestee,” wrote Chief of Police Keith Porch, in a statement, referring to the teenager. The teen has not been publicly identified because he is a minor.