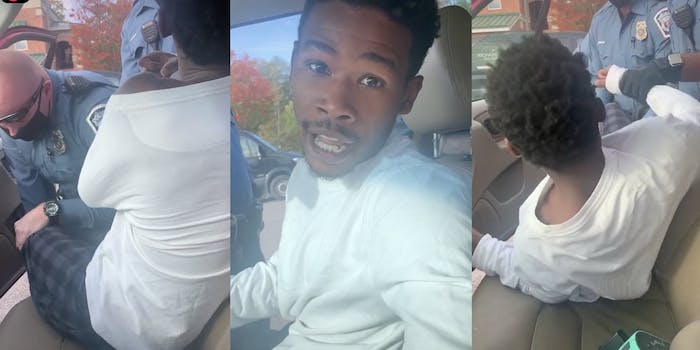 The officers demanded identification, which he refused to give.

A white woman recently shared footage to TikTok showing her Black boyfriend being arrested at a traffic stop despite her having been the one driving.

Heather Janney was stopped by Maryland police for allegedly going 45 miles per hour in a 30 mph zone, but for some reason, the cops decided they wanted to see identification for Antoine Webington, who was sitting in the passenger seat at the time.

In the video, Webington explains that he did not provide his ID to the officers, but they claimed to have identified him anyway. Immediately after he speaks, two officers reach into the car and begin forcibly trying to remove him, despite his repeated pleas to let him get out of the car himself.

Additional videos posted by Janney to TikTok show much of the same — Webington asking to get out of the car on his own as officers tug at his arms and legs. They eventually manage to pull him out and arrest him as Janney continues to film.

At one point, Webington appears to say their child is in the car as well.

According to TMZ, the police claim Webington had two warrants out for his arrest, even though it’s unclear how they would have known that if he refused to provide them with ID. As if that wasn’t enough of a conundrum, they also apparently said he was arrested for resisting arrest.

Janney insinuated in a follow-up post that Webington is still in jail following the arrest, and she also clarified that she can’t share any additional details due to it being an active case.

In Maryland, it is not legal for police to demand identification unless they already intend to charge someone with a crime.