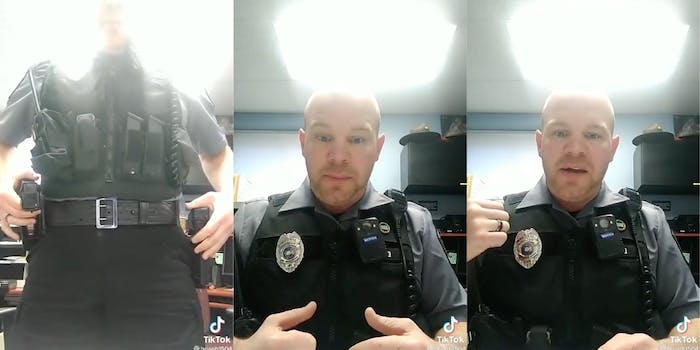 ‘I don’t understand how we can mistake a Taser for a gun’: Cop’s TikTok video on police shooting of Daunte Wright goes viral

'Nobody (dislikes) a bad cop more than a good cop.'

A police officer demonstrated how a seasoned cop should know the difference between a pistol and a Taser in a viral TikTok video.

The video was posted to TikTok by @brian1504, whose account has since been deleted, following much discussion after former Officer Kim Potter, a 26-year veteran of the Brooklyn Center Police Department, fatally shot 20-year-old Daunte Wright in Minnesota. Police officials, according to NPR, claimed Potter mistook her gun for a Taser.

The officer, going by Brian B., readies his belt with the two weapons and taps his gun as the “dominant” and his Taser as “not so dominant.”

He further explains: “Huge weight difference, guys. I don’t understand how we can mistake a Taser for a gun or a gun for a Taser. If you’re in the heat of the moment, and you do something like that, you shouldn’t be doing this job.”

“Nobody (dislikes) a bad cop more than a good cop. … I’m not going to put my life on the line to try and fix your stupidity and deal with restoring the peace with my public that I serve just because of your stupid actions,” he continues. “It makes no sense. Ninety-nine percent of our job is communication. You don’t have to be quick to pull out a gun or a taser on somebody and think everybody’s a threat.”

“Not everybody’s a threat. Try talking to them; get to know these people,” he adds.

A New York Times reported specifically on this notion, noting the florescent brightness of Tasers and that “Brooklyn Center Police Department manual cites the Glock 17, 19 and 26 as standard-issue for the department. All three pistol models weigh significantly more than a typical Taser. Glocks also have a trigger safety that can be felt when touching the trigger. Tasers do not.”

Grips on the two instruments could reportedly be somewhat similar, based on polymer types.

According to the website, the largest, professional, law-enforcement grade unit, TASER X2, is about a pound without the cartridge. The lightest of the three pistols Brooklyn Center Police uses, the Glock 26, is 1.3 pounds without ammunition. This pistol, and the other larger models, with full clips, would be much heavier than the Taser.

“If you train enough, you should be able to tell,” Scott A. DeFoe, a retired sergeant with the Los Angeles Police Department told the Times.

Wright’s family, along with many on social media, expressed skepticism over the alleged mixup, especially considering Potter’s veteran status and the fact that she reportedly helped train other officers. Potter was arrested and charged with second-degree manslaughter on Wednesday, according to NPR.