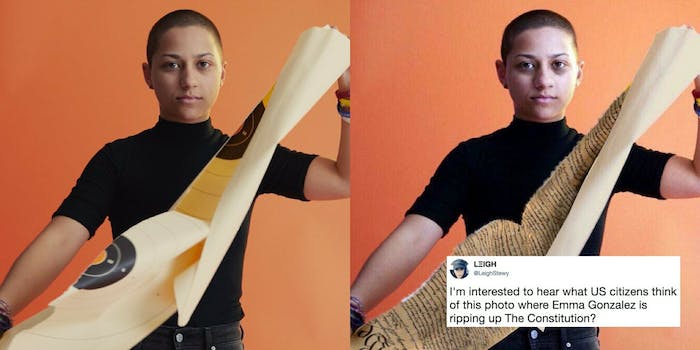 This image of Parkland shooting survivor and March for Our Lives leader Emma González tearing up the Constitution is seriously bothering conservatives. It’s also completely fake.

I'm interested to hear what US citizens think of this photo where Emma Gonzalez is ripping up The Constitution? pic.twitter.com/B5HTNKuRqV

On Saturday, amid the national gun control protests held with March for Our Lives, this altered image of González began making rounds on conservative social media accounts, purporting that González was so anti-American and anti-Second Amendment gun rights that she tore up a copy of the U.S. Constitution.

An account by the name of Jordan Rachel, which has since deleted its tweet featuring the deceptive image, commented, “Still think they just want to make a small adjustment to ur Right? If u dont like the way we are in America, why r u here? Our Constitution is what separates us aka the REASON u haven’t left yet. There are other places in the world that satisfy ur desires. Just get on the plane!”

The original photo of González, however, comes from a Teen Vogue cover shoot featuring her and three other Parkland shooting survivors. In the photos below, including a GIF of the cover shoot, González holds a paper target similar to ones used at shooting ranges, not the Constitution.

"We, the youth of the United States, have built a new movement to denounce gun violence and call for safety in all of our communities. This is only the beginning." @Emma4Change pens a searing op-ed on this generation's plans to make change: https://t.co/MV34GJgrdI #NeverAgain pic.twitter.com/FWTpOD1WKL

This image (left) being spread by guns rights activists is FAKE and a photoshopped image of @Emma4Change tearing up the Constitution. She’s actually tearing up paper target in the pic (right). Spread the word. pic.twitter.com/pWa1X1Xvka

Teen Vogue chief content officer Phillip Picardi addressed the misleading images of González on Twitter, writing that his need to clarify the authenticity of the images showed how “how democracy continues to be fractured by people who manipulate and fabricate the truth.”

At left is @tyler_mitchell’s photo of @Emma4Change for the cover of @TeenVogue. At right is what so-called “Gun Rights Activists” have photoshopped it into. #MarchForOurLives pic.twitter.com/jW6tTOv2Db

“The attacks being lobbied against Emma follow the all-too-familiar patterns: she’s an opinionated woman, she’s Latinx, she is queer. Some say those are strikes already against her when confronting the establishment,” Picardi wrote. “From where we stand, these are even more reasons we have to listen to what she’s saying and continue our unwavering support. These things don’t make her less American — they’re exactly what America does mean, especially to young people.”

Just like they’ve smeared protesters during the Movement for Black Lives, as they’ve ridiculed Muslim women, and denied the identities of trans activists, they’ll employ their typical tactics here. But as yesterday’s numbers showed, they won’t win. pic.twitter.com/wQoJdbxW2I