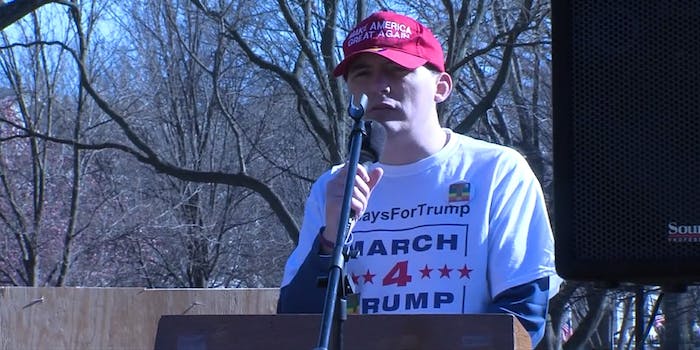 Gay right-wingers use sexuality as a weapon—often at the expense of trans people.

North Carolina House of Representatives candidate Peter Boykin has some choice words for transgender people serving in the military. More specifically, he thinks trans Americans are “mentally challenged” and would “snap” while on active duty, turning a gun on their fellow service members under pressure.

“As long as there are troops and veterans out there who are not getting the care that they should… I couldn’t care less about transgender [people] getting an elective surgery,” Boykin told the Daily Beast earlier this week.

As far as Trump fans go, Boykin’s beliefs are pretty standard fare. But there’s one thing that makes him stand out from his fellow Republicans: He’s gay.

Infamously so, in fact. He founded “Gays For Trump,” a right-wing gay organization that previously marched in Washington, D.C., in support of the president. He is also against abortion, has linked the Pulse nightclub shooting to the shooter’s immigration status, and has defended religious freedom as an excuse for discriminatory laws. In other words, Boykin isn’t just gay, he’s a far-right conservative. And in his eyes, Trump’s administration is doing more for the LGBTQ community than President Obama ever did.

About Trump, he said: “He is not against the gays at all. Donald Trump has always been pro-LGBT. He owned pageants, hotels, he works with gay people.”

Boykin represents a part of the gay community that most LGBTQ people know about but doesn’t often come into contact with. And yet when conservative queers turn out to vote, they’re quite powerful. The Guardian reports that 14 percent of gay Americans voted for Trump, noting that the president has a support base among “an influential group of gay, white, and financially well-off men.”

Gay men who tout the Trump administration’s beliefs tend to perform quite well in Washington, too. The Gateway Pundit’s Lucian Wintrich, who was previously arrested for grabbing a woman during a speech at the University of Connecticut, is one of the first openly gay White House Press Corps members. Richard Grenell, a gay conservative diplomat, was nominated by the president as the American ambassador to Germany. Even the president himself stood up for right-wing figure Milo Yiannopoulos after UC Berkeley canceled the former Breitbart editor’s 2017 speaking arrangement.

Dude what are you smoking.? This president has turned his back on us and his falsely communicated support of our community during the election. No surprise. On what precepts do you stand with him and give him your support. OMG!!!

Another proud member of the Face-Eating Leopard party who surely need not fear leopard attacks.

He would know from his own military experience? oh my bad, he was jacking off on camera for money at that age. He's an attention seeking troll wanting to use his position of privilege to harm others.

There’s some truth to what Boykin says about the president, of course. The Trump administration isn’t opposed to LGBTQ people on principle. Rather, the Trump administration is fine with a certain type of queer: White, upper- to middle-class, and conservative, preferably with traditional values. If gay men want a job, then they’re supposed to mirror their straight colleagues’ preferences in every way—except who they swipe right on.

Because conservative queers know how to navigate the right-wing world, they carry credibility. For instance, when a conservative transgender woman says trans rights are irrelevant to the LGBTQ community, conservative cisgender Americans are likely to share her voice because she is trans. And if a gay white man, like Boykin, stresses that religious freedom should be constitutional, evangelical organizations can regurgitate his words for their own ends.

Even worse, denying the wage gap exists essentially erases the experiences of women, most notably, women of color. The law center also found that Black women working full-time made only 63 cents for every dollar that white men earned, with Latina women making 54 cents to the dollar, and Native American women only earning 57 cents. Not that it matters to White. She’s repeatedly used her online presence to criticize representation for Black people, and she believes people of color use their race as “excuses for their failures.” White may be trans, but she’s just perpetuating the same conservative values that argue systemic racism and systemic transphobia don’t exist in America.

In the end, conservative queer and transgender Americans, like White and Boykin, are using what power and platform they have to hurt queers who face additional prejudices. Queer life is a lot more heterogeneous than a couple of white Trump supporters, and when right-wing gays try to speak on behalf of the whole community, they only end up silencing the people least likely to be heard in the first place. That’s troubling, because in a world where even left-wing feminism can’t even figure out how to respect the LGBTQ community, the last thing marginalized queers need is sabotage from one of their own.