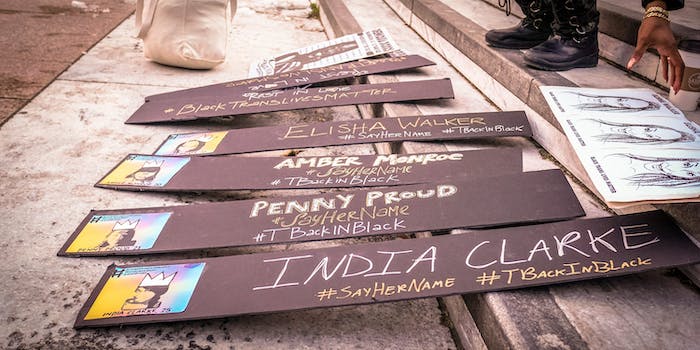 I was standing in front of a dorm sign-in desk, the February cold still fresh on my face. A young college girl was grilling me about my driver’s license, which my girlfriend’s university forced me to show in order to visit her over the weekend.

“Well,” she replied, “then you need to update your license.”

The ID itself was over three years old, but it was still good. Even though I was a year into my gender transitioning, the similarities between my past self and my present were apparent enough for bouncers and waitresses in Manhattan to know better than to ask. This, of course, was not the case with the student working at the front desk, who seemed bewildered at the idea that a boy could become a girl.

“You need to update your ID,” she told me again. “I’m sorry, but those are the rules.”

The truth was, I lacked the government documents necessary to update my New Jersey license into a New York one, so I had to hold onto my old ID for the time being. Of course, for your average cisgender college student, a problem like this is entirely unimaginable. There’s no need to hop from queer house to queer house with just the bare essentials, unable to travel back to their family’s home and grab their documents. Nor do they need to deal with the soul-crushing social anxiety that comes with outing yourself to a stranger at the DMV.

But here’s the most upsetting part: That conversation should have never come up in the first place. The three months prior, checking in to my girlfriend’s dorm had been a total non-issue, with most student workers glancing at my ID and writing me up a guest slip without a second thought. This girl was different. She was adamant in exercising her power over me, as arbitrary as it may be. And it reminded me that the difference between being accepted or denied entry to a place came down to whether a cisgender person had enough sympathy to spare a trans girl some leniency.

On the surface, a teenage girl scrutinizing a 23-year-old journalist’s driver license might not sound like violence. But violence isn’t always blatantly physically enacted by one person onto another. Sometimes, instead of wielding a weapon like a baseball bat or a gun, violence comes about because governments enact policies that deny basic rights to others.

This is called “structural violence”: when an institution or system creates social structures that “harm or otherwise disadvantage individuals,” as the blog Structural Violence explains. In this case, a college student tried to prevent me from accessing my girlfriend’s dormitory just because she couldn’t comprehend that gender is fluid. But her inability to accept my gender transitioning wasn’t just harmful to my emotional stability (I was rightfully pissed off afterward), it also played into a larger pattern of abuse where institutions limit, define, and persecute transgender people based on discrepancies between their birth certificates and their gender identities. This time, I was only slightly inconvenienced. But it’s easy to see how similar situations can play out in shelters, police stations, and health clinics, where acceptance is a life-or-death situation.

Sam Riedel, a writer for the Establishment and Bitch Media known for her work on trans bodies and activism, argues there’s a connection between institutional discrimination and violent hate crimes. She calls anti-transgender sentiments “transmisia,” or prejudice plus power, because transgender people are systemically discriminated against through institutional power that then filters down into their everyday lives.

“Institutional transmisia offers a breeding ground for violence, absolutely,” she told the Daily Dot. “I personally talked with a woman down in Florida who called the police on her abusive partner—the police showed up, started whispering, ‘Is that a man?’ and ended up arresting her instead.”

Eli Erlick knows that all too well. Erlick, who co-founded Trans Student Educational Resources (TSER) in 2011, faced harsh discrimination when she first came out in the early 2000s.

“Anti-transgender violence begins in education,” Erlick told the Daily Dot. “I opened up about being a transgender girl at the age of 8 in rural northern California. I then experienced years of isolation, harassment, and physical violence on the playground and in the classroom. I couldn’t use the school restroom for six years and didn’t have a single person consistently stand up for me during that time.”

Growing up, local Ku Klux Klan members and children threatened Erlick with “weapons, intimidating messages online, and reminders that they considered me unworthy of living.” Oppressive rhetoric leads to harassment and violence, she says.

“Individuals—including trans people ourselves—are taught that trans people are undesirable, abject, or unworthy of love when we are young,” Erlick explained to the Daily Dot. “The emergence of the bathroom bill does send a message that if political leaders can demean trans people, then it is OK for students to do the same.”

If you grow believing it’s acceptable to harass, look down upon, or discriminate against transgender people, then that will influence how you treat others into adulthood. A transphobic administrative assistant becomes a transphobic manager. A budding journalist who believes trans women aren’t women soon becomes an editor who encourages writers to publish dead trans women of color’s legal names. And a cadet who thinks transgender men should use the women’s room quickly becomes a police officer who enforces that rule in everyday life. Discrimination happens because, just like racism and misogyny, transphobic values become ingrained into institutional power structures. And when it comes to law enforcement, that increases the likelihood of a trans person being exposed to violence.

“When you know a trans woman is not likely to report a crime to the police, and that the police won’t necessarily believe her if she does or will further victimize her—that’s going to impact whether or not you think you can get away with a hate crime,” Riedel said.

And trans women are regularly killed in hate crimes; most victims are transgender women of color. This is no surprise given that identity intersects with three oppressed populations: women, people of color, and trans folk. As of Nov. 29, 25 transgender people were killed in the U.S. this year, and all but two were women and all but two were people of color. This number may seem low, but given that the trans population, let alone the trans women of color population, is relatively small, this puts their risk of death by hate violence higher than any other group in America.

Both Riedel and Erlick are adamant about shining a light on this fact. For Erlick, that means centering TSER’s activism around trans women of color. Meanwhile, Riedel fears that some trans activists veer toward “media-friendly” problems, more often than not focusing on middle-class trans people’s experiences rather than the those of Black trans teens.

“When will we get to have a national conversation about the homelessness epidemic among trans youth?” Riedel explained to the Daily Dot. “When will we be able to remember the names of murdered trans women of color for more than a few days before reading everyone’s names at the end of the year and starting the cycle anew? We’re trapped in this endless cycle of rehashing arguments ad nauseum, and nothing ever gets accomplished.”

This cycle of never addressing systemic problems is how we end up with trans women of color killed in droves every year. Institutional powers cultivate a society that encourages violence against its most vulnerable populations. And in this case, that means trans women of color—especially youth who are forced to live away from home or on the street because of combined racism, sexism, and transphobia—are often victimized the most.

Pushing back against hate

So if everyday discrimination in schools and workplaces leads to hate crimes against transgender people, that means trans activism isn’t just about changing the channel when a transphobic joke plays on Comedy Central. Allies and privileged trans people in positions of power have to work extra hard to stamp out discrimination in their school systems and workplaces by tackling institutional bigotry head-on. In short, it’s their job to help disadvantaged trans people—like Black, homeless, disabled trans women—by encouraging sensitivity training programs that stamp out transmisia.

“The most important thing anyone can do for trans students is to listen,” Erlick told the Daily Dot. “Listening doesn’t just entail hearing what we’re saying but also following through with our own recommendations. This can include staff trainings, establishing policies on campus, holding informational assemblies, changing school registration systems, creating Gender-Sexuality Alliances, and so many other actions that are unique to each institution’s need.”

Transmisia is like a hydra, festering across public life everywhere from academia to Congress. The only way to destroy its hold on society is by killing its influence in every single institution across the country. That means ending structural violence by combating anti-trans sentiments when it happens to homeless teens on the streets, or abuse victims entering domestic violence shelters, or students trying to access medical care on campus. And it also means looking at transmisia as an intersectional problem. For trans women of color, racism combines with transphobia. For queer trans women, homophobia becomes ingrained with transmisogyny. Queer trans women of color are killed because they’re queer trans women of color. And their stories tell us how to end the violence against them.

When we allow people in positions of power to attack and torture trans people, it signals to civilians that hate crimes against trans people are perfectly acceptable. And it only increases the number of trans people we must mourn every single year. It’s time for us to step up and take responsibility for our role in the bloodshed. We need to acknowledge and stamp out the transmisia that got us here in the first place.