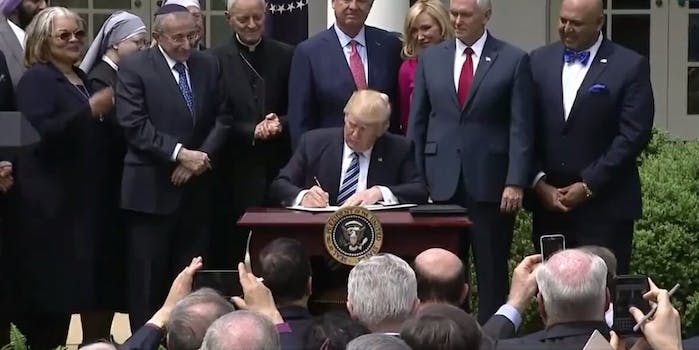 For now, legally allowing discrimination against LGBTQ people based on 'religious liberties' is off the table.

President Donald Trump has backed away from a “religious freedom” executive order that would have allowed various organizations and companies to discriminate against LGBTQ people. Instead, today he signed “Promoting Free Speech and Religious Liberty,” an order that gives churches and faith organizations broader tax relief for political activism, as well as some protections from Obamacare regulations.

In particular, the order targets the Johnson Amendment, which forces churches to avoid political activism on behalf of (or against) a political campaign in order to keep their tax-exemption status with the IRS. However, the amendment cannot be fully appealed, as the 1954 provision is an act of Congress, thus falling out of the president’s jurisdiction. Instead, Trump is instructing the IRS to use “maximum enforcement discretion” to limit punishment on faith-based organizations and churches that engage in political activism.

The order also instructs federal agencies to excuse faith-based groups and organizations from the Affordable Care Act’s contraception requirements. This means that many religious organizations will no longer be responsible for covering employees’ contraception-based healthcare needs if they cite religious freedom as a concern.

“This financial threat against the faith community is over,” President Trump said to a cheering crowd at a National Day of Prayer event Thursday morning. “In just a few moments, I will be signing an executive order to follow through on that pledge, and to prevent the Johnson Amendment from interfering with your First Amendment rights.”

“So you’re now in a position where you can say what you want to say,” Trump continued. “And I know you’ll only say good. And you’ll say what’s in your heart. And that’s what we want from you.”

Trump had previously promised to abolish the Johnson Amendment, receiving popular support on the campaign trail for the claim. And while he has partially met that promise, activists on both sides of the political spectrum are concerned with the executive order.

The left fears the order could lead to an outpouring of political activism on behalf of Republican candidates in contested areas. But for the right, the order still doesn’t allow religious organizations to discriminate against LGBTQ Americans—a claim that was hinted at earlier in the year, when a religious freedom executive order draft surfaced.

The draft would have allowed “any organization, including closely held for-profit corporations, operated for a religious purpose, even if its purpose is not exclusively religious” to cite religious freedom on LGBTQ issues “when providing social services, education, or healthcare; earning a living, seeking a job, or employing others; receiving government grants or contracts: or otherwise participating in the marketplace, the public square, or interfacing with federal, state or local governments.” In comparison, the current religious freedom executive order only represents a handshake promise—not the executive demand that many conservative Americans wanted.