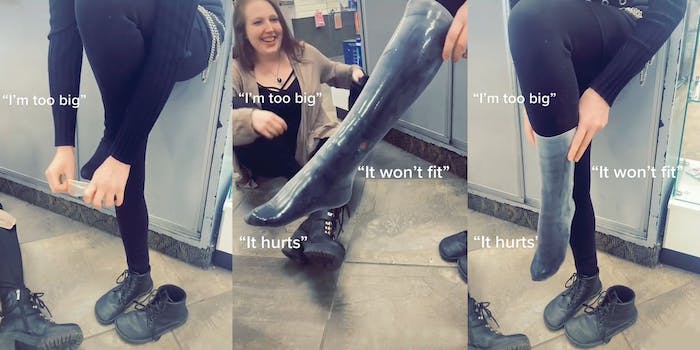 'It was very difficult not to laugh at men that said this, when I worked at an adult store.'

A TikToker is putting people who don’t wear condoms because they’re “too big for them” on blast.

Posted by user @theel_inloser, the TikTok shows a condom being extended over a foot and up to about knee-length, surrounded by mocking phrases like “I’m too big” and “It won’t fit.”

The video currently has over 8.1 million views.

What a fancy thigh high, right? That’s all

@theel_inloser later posted a follow-up detailing exactly how wrong people claiming to be “too big” for condoms really are.

As @theel_inloser notes, rather than condoms being too small, research has shown that more often than not the opposite is true. Simply put, condoms are often too big for wearers, which can lead to problems.

A study published in 2014, later referenced by the New York Times, noted that until recently, standard condoms had to be at least 6.69 inches long. However, the study found that the average penis length in America was 5.57 inches—about an inch shorter.

The Times article stated that this can lead to condoms falling off or being uncomfortable or unpleasurable to wear. Curiously, the article also noted that those with shorter penises may genuinely perceive that they are too large for a condom simply due to a typical condom’s construction.

Bigger condoms require rolling at the base to ensure a proper fit. As Ron Frezieres, a vice president for research and evaluation at the nonprofit Essential Access Health explains it, that leads to “shorter men [having] a big roll of latex at the base of the penis,” which could explain the feeling of being “too big” for the condom.

A TikToker under the video made a similar point. “Fitting and comfortably fitting are two different things,” the user noted. “If they think it doesn’t fit, they’re probably buying the wrong size.”

Even with this information acknowledged, TikTokers still took the video as an opportunity to clown on anyone claiming to be too large for a condom.

“It was very difficult not to laugh at men that said this, when I worked at an adult store,” one user wrote.

“Dude EXACTLY LMAO,” a second stated. “They just don’t wanna wear one so they lie.”

The Daily Dot reached out to @theel_inloser via TikTok comment.