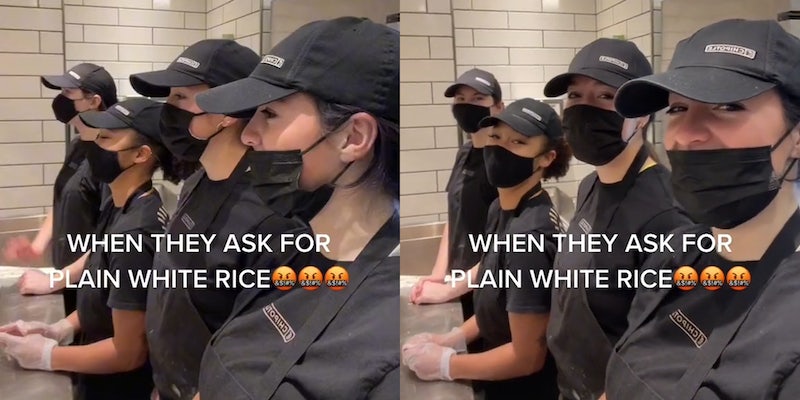 In a viral TikTok video, Chipotle workers flame customers who order “plain white rice,” because it allegedly takes them extra time to prepare it.

The video shows four Chipotle employees standing in a row and slowly turning their heads to look at the camera. It was shared by user @chipotleofnewtown, an account for the Newtown, Pennsylvania, Chipotle location.

“When they ask for plain white rice 🤬🤬🤬,” the video’s text reads.

With over 2 million views, the TikTok was a recreation of an original video by user @joshuacalland, which received 1.2 million views itself. Both are set to the popular “ThousandB” sound, which has been used in more than 100,000 TikTok videos. The used is often used to express quiet disdain for highly specific social situations; i.e. someone in the group text is laughing a little too hard at an inappropriate joke.

While Chipotle’s standard white rice contains cilantro and lime, many users in the comments justified their requests for plain white rice by noting a gene variation that makes cilantro taste like soap. According to YouTuber Hank Green’s SciShow, 4-14% of the population is conditioned to dislike cilantro for this very reason. As the Huffington Post notes in a recap of Green’s series: “most cilantro haters as people with a shared group of olfactory-receptor genes, called OR6A2, that pick up on the smell of aldehyde chemicals. Aldehyde chemicals are found in both cilantro and soap.”

“Listen I’m sorry but cilantro ruins the whole thing for me it over powers the whole meal😭,” one user said.

“Cilantro tastes like soap for some people without a certain gene. So it’s valid…would y’all wanna eat soapy rice??” said another, empathizing with those who dislike it.

However, others urged customers to power through the cilantro in their rice.

“Bro just eat the cilantro it’s not gonna hurt you,” one user said.

Some Chipotle employees also chimed in, echoing the sentiment of the TikTok. They said it can slow them down in a rush.

“Chipotle employee 🤚🏽 this means we have to go in the back and call for plain white rice WITHOUT cilantro which slows down the line 😂,” oen user said.

“As an old chipotle worker it would always be annoying having to go to the back just to get some for ONE customer 😩,” said another.

The Daily Dot reached out to user @chipotleofnewtown via TikTok comments and Chipotle via email.