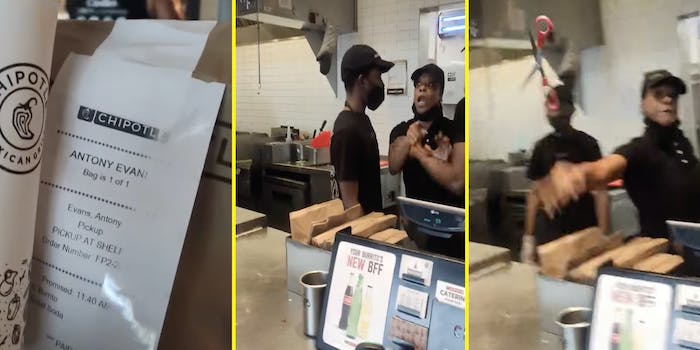 'You messed up my order, and then I come and I complain, and you just get ignorant and start clapping your hands.'

A Chipotle employee claiming to be the manager on duty was captured on video throwing a pair of scissors at a customer upset that his order was 20 minutes later than expected.

The incident, according to Antony L. Evans, who posted the video to his Facebook page Aug. 10, took place at the Chipotle at 1209 N. Charles Street in Baltimore. Evans was documenting getting his online food order later than promised, and ended up capturing a whole lot more.

He prefaced the video in his Facebook post by writing, “Don’t complain about your order if you go to the Chipotle on North Charles. I waited for my order 20 minutes in an empty restaurant. When I ask for it the second time, she started clapping her hands in my face, and hit me with scissors.” He added a series of hashtags, including #Chipotle, #KilledMyVibe, and #crazykaren.

The video begins with Evans complaining about his order being late and documenting the exchange on his phone. “You messed up my order, and then I come and I complain, and you just get ignorant and start clapping your hands,” he tells the woman behind the counter. The woman, who identifies herself as the store’s manager, pulls out her phone and appears to be recording in retaliation. She then retreats to the back momentarily while Evans promises his video was “going right on Facebook.”

She then comes back out, as he asks repeatedly, “Is she the manager?”

“Yes, I’m the manager,” she retorts. “You can call whoever you want to, bitch.” She then picks up a pair of scissors off the counter and flung them at him.

“They’re gonna watch this video,” Evans said, “and she’s gonna get her ass locked up.”

Several news reports around the incident helped flesh out some of the details. Fox News, terming the incident a “burrito brawl,” said police responded to the incident. According to WBFF-TV in Baltimore, Evans claimed the scissors did hit him in the left shoulder. The employee throwing the scissors, only identified as “Nicole” in its story, allegedly disappeared from the scene before police arrived. She will reportedly face aggravated assault charges from the fracas.

Update 8:54am CT Aug. 17: When reached for comment, Laurie Schalow, the chief corporate affairs officer at Chipotle, told the Daily Dot in a statement: “At Chipotle, the health and safety of our guests is our greatest priority. We have spoken directly to the guest regarding this matter, and have terminated the employee in question.”

The Daily Dot has reached out to Evans for comment.