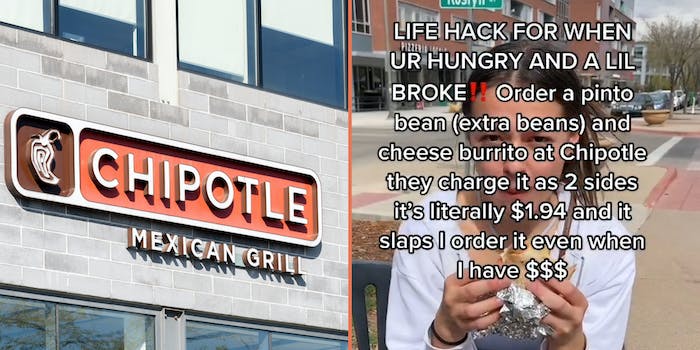 'These burritos have saved me a couple times when I really didn’t have money.'

In a viral TikTok, Hannah Hutson (@hannahhuts) shows people a “life hack” on how to get a $2 burrito at Chipotle.

Hutson uploaded the TikTok on March 10. She eats a Chipotle burrito while text overlay reading, “LIFE HACK FOR WHEN UR HUNGRY AND A LIL BROKE!! Order a pinto bean (extra beans) and cheese burrito at Chipotle they charge it as 2 sides it’s literally $1.94 and it slaps I order even when I have $$$.”

As of March 12, the TikTok has been seen over 393,000 times and continues to accrue views.

According to the online order menu on Chipotle’s website, a burrito’s starting cost is $9.35 for vegetarian fillings and more for meat, so the hack saves someone at least $7, albeit for fewer fillings.

Hutson told the Daily Dot that she’s been doing this since she was in high school. “Whenever I get chipotle with friends they’re always in awe at my order and the price and they say that they want to try it next time so when my sister and I went to get our chipotle bean and cheese burritos I decided to share the hack with the internet! These burritos have saved me a couple times when I really didn’t have money for food and they’re filling w/ good protein so I want to help out anyone in a similar position,” Hutson said.

In the comments, Hutson said you can only get the low price if you order in person and not via the mobile app, otherwise, it doesn’t give you “the 2 sides price.”

She also shared that if a Chipotle worker charges more than the $1.94, she will “politely say something.”

Hutson said you can do this with “any 2 sides.”

Commenters confirmed the alleged hack works. “I do it w cheese and rice,” one person commented.

“This was meant for me I’ve been exclusively doing this for years,” another TikToker shared.

Others said it doesn’t always work. “Tried this at several. Only once did it work and only the one time.”

Huston told the Daily Dot, “It works 100% of the time if I say something, but they’ll ring it up that way without me saying anything around 80% of the time. Sometimes they’ll charge it as something else and I just say ‘sorry it’s usually charged as two sides’ and they’ll fix it.”

One Chipotle employee commented that “different locations do it differently, which is true—Chipotle’s prices reportedly vary, depending on location. New York City’s Chipotle locations have the highest prices, while Pittsburgh and the greater Orlando area are the cheapest.

A Reddit thread from 2015 also shared a similar life hack, with the original posted saying that a rice and bean burrito only cost them $2.10. This hack, which seems to sometimes work, is another in a long list of viral Chipotle hacks.

The Daily Dot has reached Chipotle for comment on this hack via email.