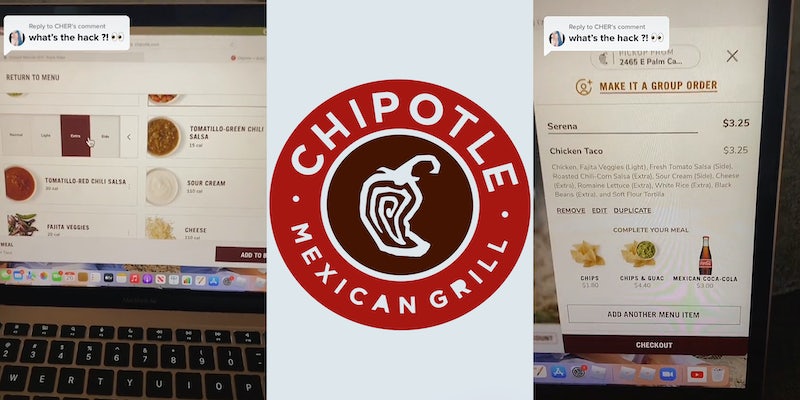 ‘Don’t come in store and try this I will not give it to you’: Customer shares Chipotle hack, upsetting workers

'I'd just cancel your order.'

In folks’ quests to save a dollar here and there, there have been some controversial penny-pinching “hacks” shared to TikTok that have been heavily criticized, like this “cheap burrito bowl” online ordering finesse shared by TikToker Serena Gonzalez.

In the clip, she demonstrates how to order a $3.25 bowl or burrito from Chipotle, which usually retails for $6.50.

In the clip, she goes through the ordering process on her laptop’s web browser. She says, “OK guys here’s a hack I learned from TikTok. You have to order online or through the app. So you’re gonna hit tacos, you’re gonna hit one taco and choose your meat, chicken is usually the cheapest…$3.25, and then flour tortilla, you can do the hard one but I think the flour will hold everything. So here’s what you need to do. On the rice, beans, click extra, slide over and click extra cause this is all gonna go on your taco. And then when you get to the salsa and sour cream, you’re gonna hit side. These are all the things you want to go on your little ramekin. Corn, extra, anything you want that goes on your taco hit extra. Fajitas you could do light extra whatever you prefer…cheese that can go on your taco hit extra cause you don’t want like a little thing of cheese. And then, make sure you ask for an empty bowl when you get there, $3.25!”

It seems the hack may be based on user @wyaleena’s viral video, where she films a friend walking through the same steps to get a $3.35 burrito. While the “hack” does seem to work on Chipotle’s online ordering system, there were tons of TikTokers in the comments section who said that ultimately the hack wasn’t worth it.

Many users stated that individuals would be receiving a “taco sized” portion of protein in the meal; that’s considered the “standard” amount of beef/chicken/etc.. The franchise usually scoops 4 ounces of protein per meal and if you’re ordering tacos, those 4 ounces are spread across the three standard tacos order. Presumably if you just order one taco, then that means you’re more than likely are going to get a third of that amount.

TikTokers found themselves divided over the hack.

Commenters who claim to work at the chain said that they dread custom orders like these, calling them “annoying.”

Another user commented, “i don’t even work at chipotle and i’d be annoyed af getting this order.”

A third said, “Don’t come in store and try this I will not give it to you.”

Another commenter wrote, “Yeah I don’t want to annoy the workers sorry.”

One user said, “Did this last week they get so mad.”

Some commenters accused Chipotle employees of being “stingy” with their portions. One Chipotle employee in the comments section said that they intentionally don’t put extra portions in a taco ever as tacos are so small when compared to the chain’s much larger burritos.

One commenter wrote, “i work there & we honestly do not put extra in a taco EVER ! only because it all doesn’t fit and the portion sizing for a taco is very small.”

Another user wrote, “As a chipotle worker we will not be putting extra for one taco gets too messy then y’all complain.”

Others speculated that because customers have been “abusing” hacks like this, Chipotle may’ve decided to start charging for sides as a result.

One TikToker wrote, “No wonder they started charging for sides now.”

Another shared, “Worked at chipotle for 2 years and all I can say is we get yelled at for going thru food too fast idc how much u get I’m just not getting yelled at.”

The Daily Dot has reached out to Serena on TikTok for further comment.