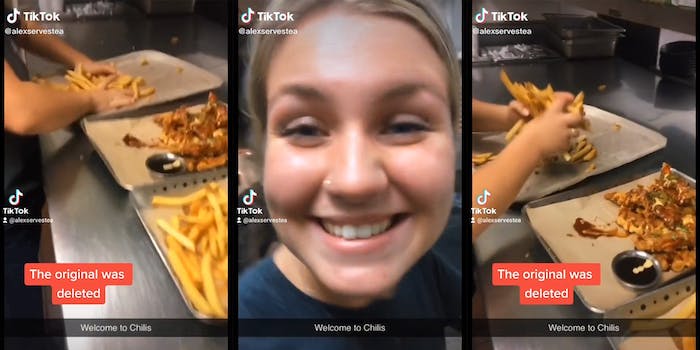 ‘They’re more than willing to make their staff work with COVID but draw the line here?’: Chili’s roasted after getting upset over worker using hands to serve fries in viral TikTok

'Chili's trying to act like they don't violate health codes and that they're extremely hygienic.'

A TikToker put Chili’s on blast for allegedly ignoring other issues while appearing concerned over a viral video of a worker using her hands to serve fries.

The TikTok includes a clip of the now-deleted video of a Chili’s employee picking up fries with her bare hands and plating them. Chili’s allegedly commented on the video in an attempt to address the outrage. However, the user Alex (@alexservestea) notes that Chili’s has continuously ignored other problems she’s been bringing to light.

“Chili’s trying to act like they don’t violate health codes and that they’re extremely hygienic,” she begins.

“I mean you guys already know everything that happened during COVID—which we’re still in COVID—and how they weren’t following COVID protocols and they weren’t wiping down the tables. And there were massive COVID outbreaks of around 20+ employees,” she says. “They’re more than willing to make their staff work with COVID but draw the line here?”

Still, the longtime service industry worker agrees that the Chili’s employee should be using a scoop to pick up the fries instead of her hands.

“But it’s Chili’s. Guys, come on. I can assure you that the cooks are not washing their hands constantly and are not wearing gloves. I would refuse to eat there depending on what cook was working,” she says.

She also notes that cooks are often not supposed to wear gloves, because they should be continuously washing their hands instead.

“I’m telling you right now when you go out to eat, the cooks are touching your food with their bare hands. And there’s no way to know if they’re actually washing their hands like they’re supposed to. And I can tell you from 15 years of working in the industry, they’re probably not,” she continues.

The TikToker then claims that Chili’s only addresses public-facing issues like this when it wants to.

“I just find it funny that Chili’s was all over this. ‘We’re looking straight into this. We’re looking into this right away.’ But they don’t look into all the shit that I’ve exposed about them. Even though they’re well aware, they don’t give a shit about that,” she says.

The former Chili’s employee accused it of not looking into sexual assault allegations and not paying its staff fairly.

She also hints at a new “runner system,” which with the introduction of tablets and food runners to Chili’s teams has created issues with tip pooling. Several workers in Pennsylvania brought about a class-action lawsuit accusing Chili’s of unlawfully sharing tips.

“That place doesn’t give a shit about you. They’re making you work for free with ghost kitchens and now they’re taking half of your tips with the new runner system,” she says.

The TikToker, whose content centers around labor rights in the service industry, ended the video by urging Chili’s employees to unionize or petition to end the new runner system.

With over 14,600 views, several users in the comments section said they’ve already come to terms with the fact that cooks touch their food.

“Pretty sure every corporate restaurant doesn’t wear gloves or wash their hands regularly,I can speak from working at one for 9 years lol,” one user said.

“Yeah I accepted a long time ago cooks touch your food. Amazing how many folks don’t realize that,” another said.

Others hinted that they had their own stories about working at Chili’s.

“This issue i have at [Chili’s] is that my server was being sexually harassed by a customer at the bar. her boss said to walk it off he is a paying customer,” one user said.

“Ohhh I have so many Chili’s stories !!!” another exclaimed.

The Daily Dot reached out to @alexservestea via a TikTok comment and Brinker International, the restaurant company that owns Chili’s, via email.