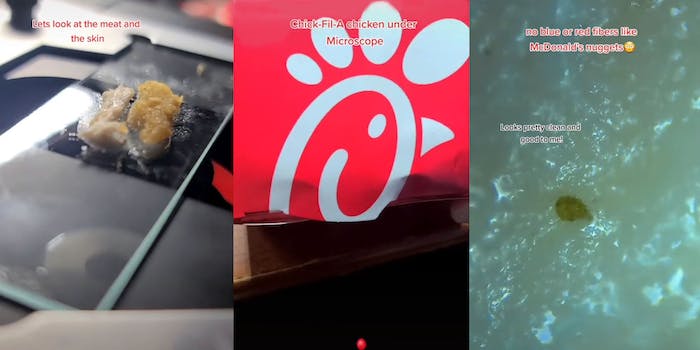 ‘You’re not going to ruin it for me’: TikToker looks at Chick-fil-A chicken under a microscope

On TikTok, user Jake (@closeintel) has gone viral on several occasions after putting food from various chain restaurants under a microscope.

Frequently, he claims his search through the highly magnified world has revealed the presence of microplastics and strange fibers. For example, he found these fibers in both Wendy’s and McDonald’s chicken nuggets.

But this left some users wondering—what about Chick-fil-A?

In 2018, Restaurant Business surveyed customers from various fast food chains about the perceived cleanliness of each chain restaurant. Ranking high above the competition was Chick-fil-A, with a majority of customers saying everything from the food prep areas to the bathrooms looked spotless.

Using his microscope, Jake took to TikTok to investigate whether this perceived cleanliness carries over into the food. His video has over 7.1 million views as of publishing.

In the video, Jake individually looks at the skin and the meat of a piece of Chick-fil-A fried chicken.

On the skin, he sees some of the aforementioned fibers, though he does note that in this case he “isn’t sure what they are.”

However, in the meat, he sees no fibers at all, which he notes is a stark difference from the previously-investigated McDonald’s chicken nugget.

“Looks pretty good and clean to me!” he writes in the text overlaying the video.

In comments, some alleged former Chick-fil-A employees chimed in to say that given their workplace’s tidiness, seeing this result isn’t surprising.

“After working at [Chick-fil-A] I can say that they are one of the most sanitary fast food places EVER and use real ingredients,” claimed a user.

“I’ve seen a lot of people say it but I worked there 2 years ago and it’s insanely sanitary and that’s the truth,” agreed another.

On its website, Chick-fil-A claims that it sources “100% real, whole, boneless breast of chicken that has never been ground or separated, and that contains no fillers or added steroids or hormones,” which seems to back up these users’ statements. The chain also lists ingredients for each product on its website.

However, some alleged the fibers visible in the video were also microplastics.

Even if they were, Jake explains in the comments under one of his videos that he doesn’t necessarily fault a restaurant for having microplastics in their food given how prevalent the problem is.

“Just to be clear, I understand micro-plastics can be in anything! I am just doing what people reccomend me to do, and bringing awareness to what we ​​ingest without even realizing it,” he writes. “I am sure there are micro plastics in most foods, especially processed ones like these!”

Jake’s assumption is correct. A 2019 study discovered a significant amount of microplastics in seafood, bottled water, and even the air we breathe every day. A further study also discovered microplastics in a host of vegetables, including apples, pears, and broccoli.

Microplastics or not, many TikTokers say they’re still going to chow down on some Chick-fil-A.

“Am I the only one that doesn’t care?” asked one user. “As long as I’m not obese and it tastes good ima eat it.”

The Daily Dot reached out to Jake via Instagram messages.