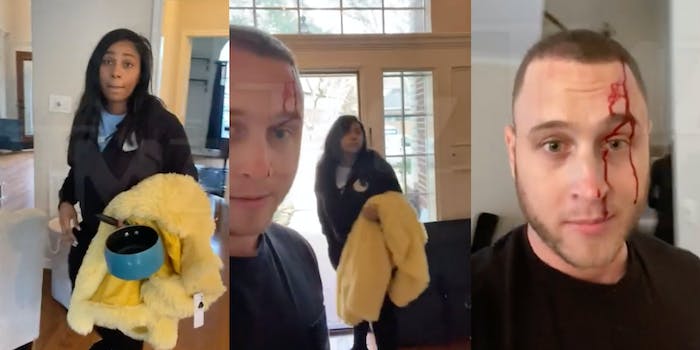 The 'White Boy Summer' pioneer finds himself in hot water.

Video of Chet Hanks’ violent altercation with his Black ex-girlfriend has resurfaced shortly after he praised “Black queens” on social media and hawked his “White Boy Summer” merchandise.

Hanks went viral this week for predicting that we are headed toward a “White Boy Summer.” The actor seemingly comes under fire every few months for things like speaking in a Jamaican “blaccent.” But the newly surfaced video, as well as the multiple accusations of abuse from his ex, Kiana Parker, are far more serious.

In the video shared by TMZ, Hanks claims that Parker charged him with a knife at his home in Sugarland, Texas, on Jan. 8. He turns the camera to reveal his bloodied face. Parker maintains her innocence and protests Hanks’ version of events in the background of the video.

Parker has accused Hanks of acting violently toward her several times between October 2020 and January 2021, according to TMZ. She obtained a restraining order in January and is reportedly in the midst of pursuing legal action against him. Hanks has likewise accused Parker of abuse and filed a lawsuit against her on March 4.

Hanks’ lawyer, Marty Singer, told TMZ that the Jan. 8 altercation was prompted by Parker “stealing money from his credit card.” He adds that on the day Hanks filmed himself with a bloodied face, “Ms. Parker was accompanied by a huge male carrying a gun.” Singer further claims that Parker “viciously attacked Chet with a knife, which caused him to profusely bleed.”

Parker, meanwhile, has alleged multiple instances of abuse. She claims one incident arose during the couple’s stay in New Orleans while Hanks was filming Your Honor. Parker told TMZ that Hanks “became enraged” when she went to leave the room. The following altercation resulted in tables being knocked over, a bottle being thrown, Hanks “[chasing] her down the hallway in his boxers.”

A widely shared screenshot of Parker’s affidavit shows some of the case’s more shocking allegations. Parker claims Hanks repeatedly threatened and degraded her, telling her, “‘He was Chet Hanks and I wasn’t shit, no one would believe me, I was just a ghetto black bitch,’ ‘if I left he would jump off of the balcony,’ ‘it was his hotel room and not mine, I was just a visitor and would be the one that got in trouble.'”

The excerpts from Parker’s affidavit prompted widespread outrage online. Many people found the claims that Hanks degraded Parker because of her race particularly horrifying, considering the actor’s history with Black women. He has a biracial child with his ex, Tiffany Miles, and promised to follow up his “White Boy Summer” merch with a Black queen merch line, claiming you can’t be a “real vanilla king without a Black queen.” The last bit earned Hanks plenty of criticism for fetishizing Black women.

The Daily Dot reached out to representatives for Hanks and Parker.