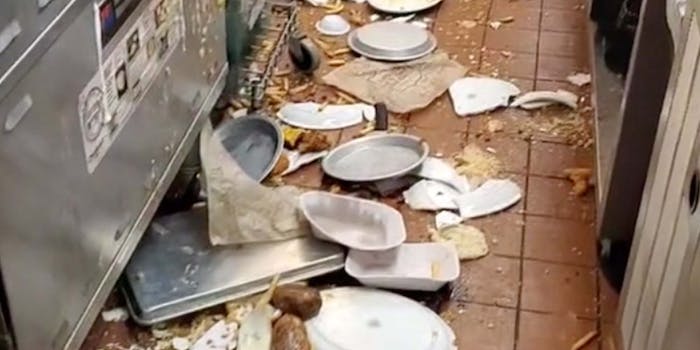 'Doesn't matter how upset a person is, there's no reason to treat people that way.'

In a TikTok posted on Dec. 17 by @dirtdawg420, plates and food are strewn all over a restaurant kitchen floor. @dirtdawg420 captioned the video saying that the food expeditor—also known as an “expo”—at the restaurant he works at quit “and threw every plate as us cooks.”

“We almost did all leave,” @dirtdawg420 commented on the video. “The servers cleaned it up and we got right back to it.”

The video has received 7.6 million views. Other TikToks of people quitting their jobs publicly have gone viral recently, too.

Users in the comments section of @dirtdawg420’s video were divided about the food expeditor’s actions.

“[That’s] why we need to treat employees better,” wrote @user262497140664. @dirtdawg420 responded saying that he and his coworkers are “under appreciated and underpaid.”

“This is what [happens] when management doesn’t care,” commented @nadiii.txxx. “Sometimes it’s not the workers fault.”

“Poor dude, must have been overworked and finally lost it,” commented @ashbashtastic.

Former food expeditors chimed in, too.

“I cried a lot from stressing because the managers would watch me struggle and not help during a rush,” commented @butterrballs.

“It’s stressful when cooks won’t give [you] what [you’re] missing & waiters are pushing for their plates,” wrote @dramaticmood.

The Daily Dot has reached out to @dirtdawg420 and Cheddar’s Scratch Kitchen.