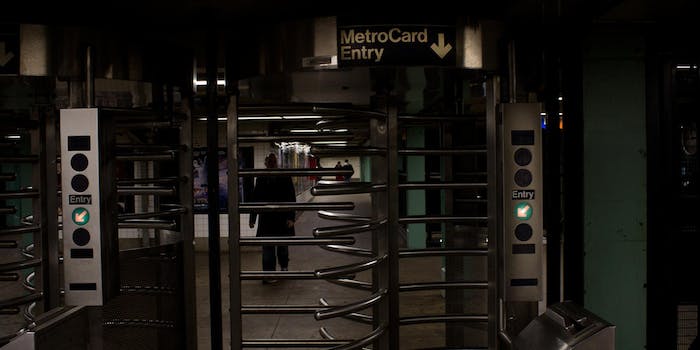 It’s a common annoyance for New Yorkers: you’re heading through the station trying to catch the latest train, but the turnstile is locked, and there’s not enough money on your MetroCard.

“They’re optimized to make you end up with leftover money that’s there until you refill [the card],” Ben Wellington, a visiting assistant professor in city and regional planning at the Pratt School of Architecture, told the Daily Dot.

“It’s always bothered me, having the extra fare on your card for a long time,” he said. “I’ve been complaining about it for years. I was on the machine and started doing the math, trying to see how one could get a round number.”

Instead of just coughing up the cash, Wellington discovered the secret formula for loading the perfect amount of money on a MetroCard. He figured out the numbers on Tuesday and posted the amounts on I Quant NY, his data blog about New York. 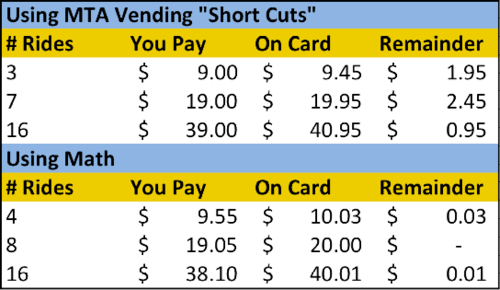 It currently costs $2.50 per trip on a New York subway or bus with a MetroCard. Fees went up last year, the fourth hike in five years, and are expected to increase again in 2015 and 2017.

According to Wellington, those are the three best ways to get an almost perfectly even amount of money on the card for total trips. If you want four rides, put in $9.55. If you want eight trips, deposit $19.05. And if you want 16 rides, insert $38.10. You can manually enter the amount in “other amounts.”

This might be confusing. After all, shouldn’t putting $20 on the card mean you’re getting $20 worth of rides? Well, that might be true, but a couple dollars of it might go to waste. That’s because the MTA hands out five percent bonuses if a card upload is big enough. If you play your cards right, that five percent bonus can turn into the perfect amount of money for rides. If you don’t, then you’re out a couple of bucks, especially for those visiting from out of town.

“For more MetroCard users it’s not a big issue,” Wellington said, “but certainly visitors who pay cash will end up leaving the city with extra money on their card, there’s no doubt.”

He said never go with the preloaded options the MTA tries to sell. Most of them will automatically leave you with extra money on your card after a certain amount of train rides. For example, if you put $19 on your card, which is one of the main preloaded options, “it’s basically seven rides and then you’re five cents short for the eighth.” 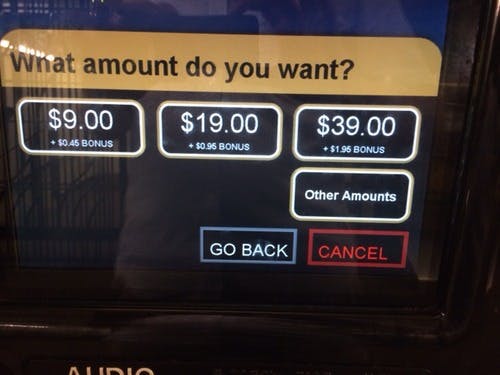 He also explained the MTA makes a solid profit from people who pay more money up front, especially if they don’t end up using the leftovers later on. According to the New York Times, there was more than $500 million in excess balances on MetroCards between 1990 and 2000. Those totals have expired and can’t be redeemed, leaving MTA with a nice cushion of unused funds.

“I think it’s fairly lucrative,” Wellington said. “The earlier you pay money, the longer you have it on your account … [The MTA is] getting money earlier than they would otherwise.”

He suggested MTA change their policy from “How much do you want to pay?” to “How many rides do you want to take?” That would ensure riders are getting the most bang for their buck, instead of an extra $2 on their card that they can’t use. In the meantime, he hopes his numbers help New Yorkers and tourists get the most out of their train rides. He also said it’s possible to figure out numbers for other cities as well, like Chicago or San Francisco, though he hasn’t looked at them personally.

“The idea of the post is to give people the power,” Wellington said. “It’s mentally a lot easier when you look and see the round numbers.”