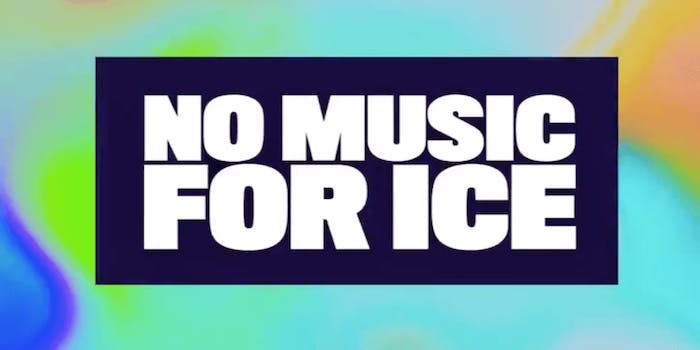 More than 800 musicians have signed.

Hundreds of musicians have signed a #NoMusicForICE petition and pledged to boycott Amazon until the tech company stops “supporting human rights violations” and cuts its links with U.S. Immigration Customs and Enforcement.

A group of musicians launched the petition yesterday partly in response to Amazon’s upcoming Intersect music festival, which will take place in Las Vegas in December. By Friday morning, over 800 musicians signed the petition, including music groups like Deerhoof, Downtown Boys, and Priests.

“We will not allow Amazon to exploit our creativity to promote its brand while it enables attacks on immigrants, communities of color, workers, and local economies,” the petition says. “We call on all artists who believe in basic rights and human dignity to join us.”

My #FridayMotivation is waking up to find out MORE THAN 800 musicians have now signed on to our #NoMusicForICE open letter pledging to boycott Amazon events and partnerships until they stop providing an operational backbone for ICE's human rights abuses. https://t.co/YyfMh6urpv pic.twitter.com/dzz6NsftrW

Amazon helps make detainment and deportation possible with its connection to Palantir, a software that ICE uses in the field when it conducts immigration raids. Palantir relies on Amazon’s Cloud services to run its program. As a result of Palantir’s contract with ICE, the number of immigration arrests increased from 2016 to 2017, WNYC reported in July.

The artists say that the announcement of Amazon’s music festival was the tipping point, but the petition also declares signers “will not engage in exclusive partnerships” with Amazon. Musicians said they were inspired by movements like Cartoonists Against Amazon, No Tech for ICE, and Whole Worker, which have similarly protested Amazon’s support of Palantir.

“Emotions were running really high,” Sadie Dupuis, organizer and member of the bands Speedy Ortiz and Sad13, told the Daily Dot. “Why not put it into something productive?”

spent the past week discussing amazon's complicity with ICE, and how musicians can organize to say NO. we authored @NoMusicForICE and are amazed at how much support it's gotten before we've even gone public. read it here, sign it, share it, thank you https://t.co/TnwpdTQF3n

The artists said in the petition that Amazon should end contracts with all military, law enforcement, and government agencies that “commit human right abuses”—not just ICE.

“As a Mexican-American person, the way Amazon and other American tech companies are supporting ICE and the DHS’s racist agenda against migrants is abhorrent to me,” said Carmen Perry, one of the organizers of the letter and vocalist from Remember Sports. “It felt important to try to take a stand and get other musicians involved.”

#NoMusicForICE also demands that Amazon stops projects like facial recognition technology, which the organizers said have been used to “encourage racial profiling and discrimination.” Amazon did not respond to the Daily Dot’s request for comment.

The organizers say that the signatures from bands and artists are coming in faster than they can update the website, and they hope to hit 1,000 signatures by this weekend. Their petition is on the website Fight For the Future, a nonprofit that advocates for digital rights.