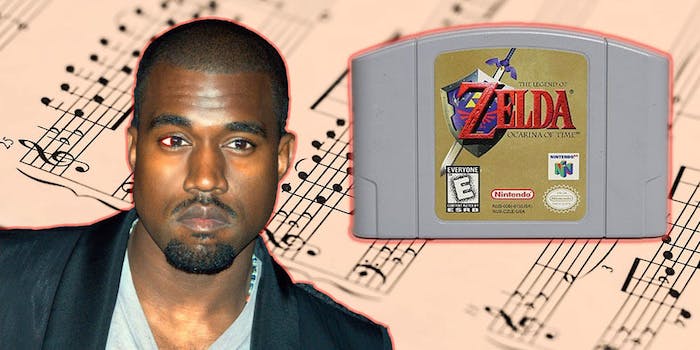 Did Kanye West’s ‘Jesus Is King’ lowkey rip-off The Legend of Zelda?

One of the album's tracks sounds strikingly familiar...

Kayne West’s highly anticipated album Jesus Is King dropped on Friday after countless delays left fans wondering if their prayers would ever be answered.

Arriving four weeks after its original release date, West’s ninth studio album is a gospel-infused creation featuring the likes of everyone from saxophonist Kenny G to Clipse, Timbaland, and Pi’erre Bourne.

Reactions to the album were mixed. Many Kanye stans were ecstatic at the arrival of new material while others scratched their heads at the religious endeavor.

Among the many opinions circulating online though was an interesting discovery. One of the 11 tracks seemed to sound familiar. And if you grew up with a Nintendo 64, you too may recognize that sound as well.

Musician Louie Zong noted on Twitter that the track “Selah” was reminiscent of The Legend of Zelda: Ocarina of Time.

noticed something while listening to the new kanye album… pic.twitter.com/q1nRklkhf4

Don’t hear it? Check out the song “Gerudo Valley” from the game’s soundtrack.

While in a different key, West’s song seems to use the same chords and sounds.

The Zelda version is credited to composer Koji Kondo, who wrote all the songs for the iconic game.

It remains unclear though how the section of West’s song was crafted and whether a sample from Zelda was knowingly used. Credits for the song make no mention of Kondo either. Was someone playing too much Zelda?

Either way, West’s supporters seemed to embrace the similarities.

“Why does Gerudo Valley make every song better?” one Twitter user asked.

Why does Gerudo Valley make every song better?

like, i know its just four chords, but they so specifically evoke that theme haha

Or maybe West is just a Gerudo, the desert-dwelling nomadic people populated almost entirely by females that only produces a single male every 100 years.

KANYE IS A GERUDO

Whatever the case, the album will likely do incredibly well regardless of Zelda.