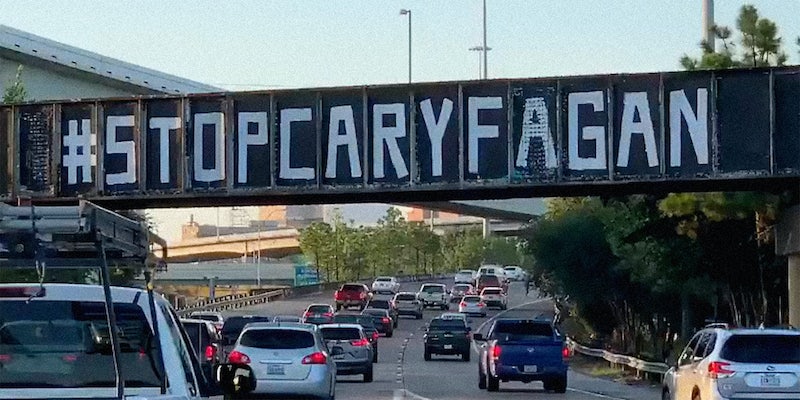 At least one person has accused Cary Fagan of rape.

Cary Fagan, a photographer and filmmaker best known for his work with Solange Knowles, Kanye West, and A$AP Rocky, has been accused of sexual abuse, rape, and exploiting teenagers by the users behind the Instagram account @StopCaryFagan. On Saturday, the account began to share testimonies from survivors who say Fagan assaulted or harassed them.

Warning: This article includes descriptions of sexual assault and coercion.

“Cary Fagan is a serial predator, abuser, pedophile, rapist who has harmed 50+ womxn and counting for over a decade,” the Instagram bio of @StopCaryFagan says.

The Instagram account began posting on Saturday and acquired more than 3,400 followers by Wednesday as accusers and allies amplified its posts. @StopCaryFagan has also posted messages from artists and designers who have worked with Fagan condemning the photographer’s behavior and vowing to discontinue work with him in light of the allegations, plus messages from artists clarifying that they have never worked with Fagan.

In a recent post, the account’s administrators identified themselves as “survivors of his abuse” and clarified that the account is Houston-based and “an entirely grassroots movement.”

While individual stories vary, multiple women have accused Fagan of video chatting with them when they were teenagers under the guise of planning a photoshoot. At least 15 survivors said that once on the call, Fagan turned his camera off—claiming his phone was “broken” or “old”—and directed them to try on outfits while on camera with him.

Potential “shoots” that Fagan said he was planning for would allegedly be postponed multiple times, and some survivors said they caught on to his true intentions: looking at women in bodysuits, swimsuits, lingerie, and even topless in poses of his choosing.

“I was blinded by the opportunity of getting to work with him,” wrote Tricia Jane, a designer and stylist from Houston. Jane included screenshots of her messages with Fagan that show him asking her to wear “anything that’s sexy” and asking her to not wear a bra under a sheer top.

“Once I got tired of Skyping him, he would spam me with calls at 1-2am and got aggressive if I didn’t respond,” Jane wrote. Many others echoed Jane’s story, including some who said that Fagan contacted them while they were still in high school.

In another testimony, model Eden Abebe said Fagan took a photo of her in a sheer top without her consent and then repeatedly asked her to hang out and continuously contacted her.

Others shared stories from when Fagan allegedly worked with American Apparel.

“When I was 17,” wrote an anonymous survivor on Instagram, “[Fagan] raped me while I was barred out in his car.” They said the rape occurred in 2013.

Another individual who submitted to @stopcaryfagan shared that they worked with Fagan in 2013 and 2014 at American Apparel, where he would tell them “ad nauseam about his photography [and] sexual escapades.” The individual said that Fagan told them that “he had found a young girl to photograph and said he fucked her in his car after basically promising to help her with her modeling career.”

The individual said when Fagan photographed a Knowles show, their “heart dropped.” “I knew in that moment that he had successfully leveraged his photography to abuse women into a successful career,” the person wrote.

While unique in its rapid circulation, @StopCaryFagan is one of many viral social media accounts that have accused well-known artists, executives, and other prominent figures of sexual abuse.

Survivors sharing their stories on social media accounts, either via their own accounts or through aggregate efforts like @StopCaryFagan, “represents an environmental shift for disclosing sexual violence,” according to a 2020 study performed by University of Toronto researchers Ramona Alaggia and Susan Wang.

“Sexual abuse/assault survivors have found voice through social media after periods of silence and being silenced, turning to posting on-line when people and systems have failed to validate and support them,” Alaggia and Wang continue.

A 2016 interview of author and consent advocate Amber Amour for the Guardian drives Alaggia and Wang’s points home. Sharing the details of the time she was raped on her Instagram was Amour’s “own form of justice.”

Amour told the Guardian that she didn’t trust that the criminal justice system would help her and said that relying on herself made her feel less helpless. In addition, the ways in which sexual assault is processed don’t account for the emotional fragility or well-being of survivors. Thus, sharing their story multiple times, sometimes in front of their assailant in court, can be traumatizing.

The @StopCaryFagan account is asking for followers’ support. Its Instagram bio asks its followers to “help us get our stories heard.”

Some posts on the account also focus on Fagan’s professional transgressions, which include allegations that he tried to take credit for the “signature work” of artist Chandrika Metivier, overcharging for “half ass” work, and trying to “rip off a Black model by initially not paying her for a photo of her that he started selling without her permission.”

Metivier created a public art demonstration using the hashtag #STOPCARYFAGAN by painting it in white, bold letters on an overpass in Houston.

On Tuesday, the account’s administrators asked followers to tag celebrities who have worked with Fagan in the comments of their posts. Followers tagged @diet_prada and @shitmodelmgmt, accounts that act as watchdogs for the fashion and modeling industries, as well.

“We are applying pressure and we are heard!” the account wrote in an Instagram story. “But it does not stop here! Tag these celebrities in the comments of our posts so we can help bring more awareness.”

The account also shared a Google form for survivors to use when submitting their story to streamline the “many stories [they’re] receiving against Cary Fagan for illegal sexual violations.”

The Daily Dot has reached out to @StopCaryFagan, Jane, Abebe, Metivier, and others named in the Instagram account’s posts for comment.