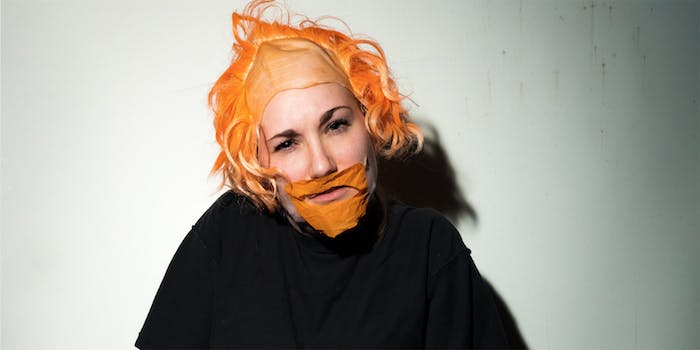 The standup comedian performs as a satirical character based on Louis C.K.

Caine, 29, is no stranger to satirizing C.K.’s sexual misconduct. She debuted her character Penis C.K. in 2018 after C.K. made his return to standup only a year after he publicly confessed to exposing himself to five female comedians without their consent.

Critics of her performance accuse Caine of forcing the character on audiences, which she says is exactly her intention. “Sometimes people are like, it’s just too much,” Caine said. “And I’m like, yeah, isn’t it?” Caine hasn’t performed as the character since 2019 and is unsure if she will again.

It’s clear that Caine doesn’t shy away from advocating for victims of sexual assault, even when doing so makes others uncomfortable. Alongside creating Penis C.K., Caine began outing alleged sexual predators and harassers in the comedy industry via her Twitter account in 2018. Since then, Caine has grown more relentless in her crusade.

In July, Caine called out Ontario Improv for booking Bryan Callen, whom she called an “accused rapist,” in a tweet. “You’re making stand-up comedy look bad, Ontario Improv,” Caine tweeted. The Daily Dot has reached out to Callen, who released a statement in August 2020 “categorically and absolutely” denying all allegations. Callen’s verified Instagram account boasts 858,000 followers, and his statement has been viewed more than 784,000 times.

In September of last year, Callen filed a lawsuit against the husband of the woman who said the comedian raped her. Callen dropped the lawsuit in April.

Some of Caine’s call-outs are vaguer than others: On July 8, she tweeted that a “sex offender is on a Netflix stand-up lineup” and urged audience members to watch their backs around “this person who is known to assault drunk audience members at shows.”

Caine’s Twitter presence depends on the reality that sexual misconduct is a continuing problem in the comedy industry. According to a 2018 survey from USA Today, 94% of women in the entertainment industry reported having been sexually harassed in some form; the Rape, Abuse, and Incest National Network (RAINN) reports that one in six American women “has been the victim of an attempted or completed rape in her lifetime.”

Caine told the Daily Dot that more than 60 people in the comedy industry have told her they were sexually assaulted by another comedian and that most of the messages she receives are from women. Men have also messaged her saying they’ve been assaulted by bookers and higher ups in comedy.

“I’ve listened to different versions of the same story so many times,” said Caine, who added that she receives messages from survivors who blame themselves for being sexually assaulted. And because only 25% of sexual assaults are reported, according to the Department of Justice, the majority of assailants don’t face any consequences.

Caine has taken it upon herself to stand up for those survivors and the countless others who suffer in silence. In interviews with the Daily Dot, comedians Jen Kirkman, Stefania D’Andrea, and Elani Nichelle, who all know Caine socially, corroborated her statements about how common sexual assault is comedy.

Nichelle told the Daily Dot that when she hears about allegations of sexual assault or “men on the scene being creepy,” she’s inclined to believe them because of her own experiences being a woman in comedy. Nichelle explained that when she first started doing stand-up in 2019, she felt that her male peers “tested the waters” with her by trying to suss out whether or not she’d sleep with bookers or fellow comics for career opportunities.

“There are some bookers who won’t book you if you’ve basically given the ‘I’m not really interested in sleeping with anybody vibe,’ [or] if you have a boyfriend or if you have a husband,” said Nichelle, who added that she’s been advised to show a “little cleavage” in order to get booked—all forms of quid-pro-quo sexual harassment.

The experiences of another female comedian, who is not affiliated with Caine and asked to remain anonymous, are in line with Nichelle’s. “I definitely have friends that have warned me about specific people,” the source told the Daily Dot. She said she avoids those “specific people” and doesn’t spend time with other comedians after shows late at night. She also said sometimes after she leaves bars and comedy clubs, friends tell her something “awful” happened to them.

“So many women agree with Kelsey” but are “afraid to say something,” D’Andrea told the Daily Dot. “They kind of just watch her because she’s brave enough to say something.”

Nichelle agreed. “[Caine has] been more vocal about who is actually a sexual predator or acting inappropriately than anybody that I’ve seen,” Nichelle said. “A lot of people are scared to talk about it on social media because they’re afraid of getting doxxed or their scene not booking them anymore.”

Caine said she has refused comedy gigs because of her zero-tolerance policy when it comes to working with comedians accused of sexual misconduct. “I don’t consider anything with a sex offender [a job] opportunity,” said Caine, who says she prioritizes her safety over success in the comedy industry. “It’s dangerous to go places sex offenders are openly welcomed.”

Caine said her motivations are simple: People sexually assault, harass, and rape other people, and she doesn’t think that information pertaining to sexual misconduct should be withheld from others. In fact, she feels other people deserve to know if there are people who have committed sexual misconduct in their midst.

“People think if you are trying to be someone who does well in the comedy industry, you have to be a part of covering up literal crimes,” Caine said, who says it’s not her responsibility to cover up sexual assault as a working professional in comedy.

Of course, forging her own path and exposing sex offenders on Twitter does take its toll on Caine.

“I’m scared all the time,” she said. “I’m sure I’ll be attacked in some way for the rest of my life because of what I do.” Caine said she realizes that sexual assault in the comedy industry will continue regardless of her Twitter presence and has made the choice to do something about it.

In addition to channeling her “rage for days” against sex offenders via her Twitter presence, Caine recently founded a podcast network and splits her time between stand-up and producing specifically for comedians who aren’t sexual predators.

Although Caine doesn’t engage with any legal measures or bodies to report sexual misconduct, she is certainly inciting change. Katherine Franke, a professor of law at Columbia University who also heads the University’s Center for Gender and Sexuality Law, calls Caine’s public shaming an extralegal measure, or an action beyond the scope of the law.

Franke told the Daily Dot that Caine’s “public shaming” works on multiple levels. Caine shames people who have reportedly sexually harassed others, sends a message to those sexual harassers who have not yet been outed, and keeps potential new harassers from engaging in sexual misconduct because they fear their names will end up on Caine’s Twitter account, Franke says.

Sexual misconduct of any kind is very difficult to prosecute, Franke said. Survivors don’t report their assault to the police because they fear retaliation and/or that they won’t be believed. If they do report, they have to endure interrogations about their assault by police officers, lawyers, and finally on a witness stand in the same room as their assailant. Ultimately, current legal processes don’t prioritize the emotional wellbeing and understandable fragility of survivors.

In addition, the defense that “I didn’t know that what I was doing was sexual assault” holds up frequently in court, Franke said, in part because prior relationships of any kind between victims and assailants make sexual misconduct all that more difficult to prove.

Franke told the Daily Dot that there is a synergy between legal and extralegal measures when it comes to achieving justice for survivors of sexual misconduct. She emphasized the recent surge in restorative justice, or alternatives to the criminal justice system that usually take the form of moderated conversations between victims and perpetrators to repair harm and encourage accountability, in response to incidents of sexual misconduct.

That said, the onus of restorative justice initiatives to achieve justice for sexual assault survivors tends to fall on the backs of survivors.

Caine, who is a survivor herself, said that when people who she suspects have committed sexual assault message her, she directs them to RAINN in the hope that they’ll realize that what they’ve done is sexual assault.

“Because I think a lot of people sexually assault people—and as the person who sexually assaulted me said—‘I thought that was just a bad night,’” said Caine, who spoke about her own assault in a Time magazine piece in 2019.

Comedian Marissa Goldman anecdotally confirmed the ambiguities of sexual assault in the comedy industry and said there needs to be more widespread terminology to use when talking about sexual assault.

“A lot of times [people] will just say ‘He’s a creep,’ and I think everybody’s line of what is bad is different,” Goldman told the Daily Dot. “It’s always very shrouded in mystery.”

Kirkman told the Daily Dot that she thinks that Caine’s efforts to educate the public about sexual assault through her Twitter helps achieve both of Franke’s stipulations.

“The most important part of [Caine’s work] is if any other comedians are watching they know that she has their back if they want to speak out too,” said Kirkman. “I know that she does this kind of work with the intention of making sure that no one feels alone.”

Nichelle, D’Andrea, and other female comedians that spoke with the Daily Dot for this article said Caine’s efforts give them hope for a brighter, safer future for the comedy industry.

“Kelsey actually is attacking an army,” D’Andrea said. “We just need to stop giving money and an audience and a voice to people who hurt other people.”