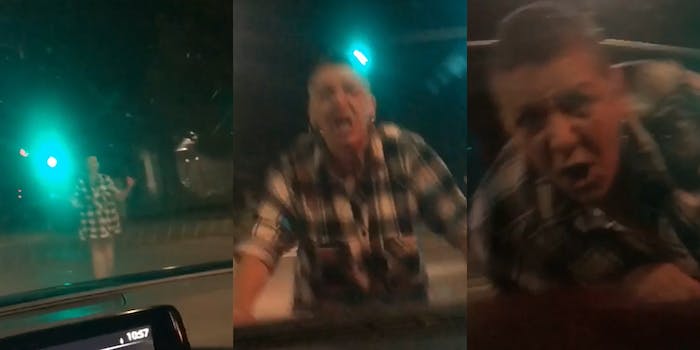 She flew away like a 'Grand Theft Auto' pedestrian.

In a video going viral all over Reddit, a woman dubbed “Carti Karen” blocks and climbs on top of a car, and is thrown off like a pedestrian in the video game, Grand Theft Auto.

The video starts with the driver demanding the pedestrian, appearing to be inebriated, get out of the road. The woman proceeds to come around toward the driver’s side and bang on his hood, perhaps upset at the Playboi Carti music blaring from his Mazda. To his surprise, she then climbs onto the hood of his car while berating him.

Wasting no time, he revs up his car, and the woman flies off to the side, onto the road, where the video ends.

The video owner, u/radai47, said in the post that the incident happened in California. According to the poster, the “Carti Karen” is doing fine: “I spoke to police after it happened and the family and she was fine. Just hella alcohol. Her and her family still think it’s funny that I managed to record it.”

Numerous other redditors commented that the event looked like a scene out of the video game series, where pedestrians being run over or off the road are commonplace. The video was upvoted more than 7,100 times alone in the Playboi Carti fan subreddit, before being shared to the larger “Fuck You Karen” subreddit late Thursday.