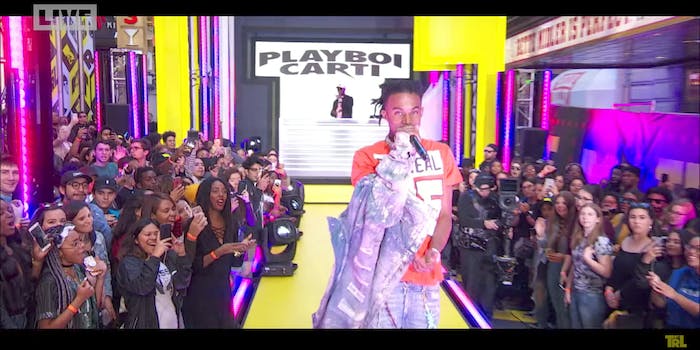 It just ain't what it used to be.

The reboot of TRL began airing on MTV this week, reviving a daytime show of the late ‘90s and early ‘00s that defined an era oversaturated in pop culture.

But as much as teens used to rush home from school to catch the music video countdowns, people on Twitter are saying the new TRL just isn’t what it used to be.

So I attempted to watch #trl today but it was awful. No music videos, all the hosts trying too hard to be cool, and it all came off sooo corny! Not at all what it used to be pic.twitter.com/zHbalAb7Sh

If you want to feel old and frustrated, watch this reincarnation of #TRL with no music videos and people you've never heard of #ugh

The first episode didn’t even include music videos.

Tuesday’s episode had that, at least.

we just played a music video

The whole reboot can pretty much be described by the enthusiasm—or lack thereof—displayed by Playboi Carti in his performance of “Magnolia” on the show Tuesday.

playboi carti but such little effort into his TRL performance that the audio is almost a psychedelic experience https://t.co/bBo6trELmQ