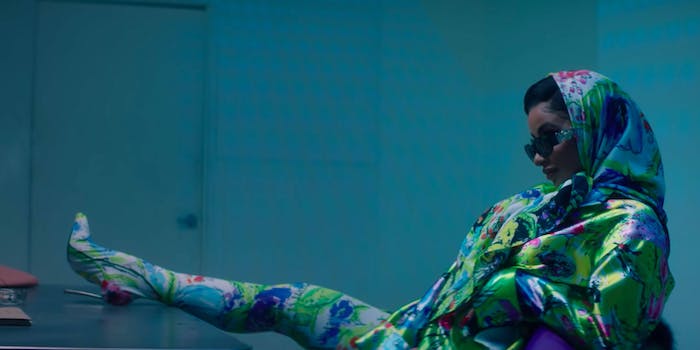 The hashtag #CardiBIsOverParty was trending on Twitter on Thursday as alleged screenshots of her comments with offensive language resurfaced. Screenshots also alleged to show a finsta belonging to Cardi and included comments throwing shade at Nicki Minaj, Megan Thee Stallion, and Ariana Grande.

Still, thousands of tweets called on Cardi to be canceled. Many of the tweets rehashed her past behavior, like the time Cardi threw a shoe at Minaj at a Harper’s Bazaar party during New York Fashion Week. People also recalled the times she sent bodyguards to beat up strippers, called Black women “roaches,”  was openly transphobic, and admitted to drugging and robbing men.

The alleged finsta account, @nobudgethoe, posted a photo of this week’s Billboard Hot 100 Top 10 where Nicki Minaj is in the No. 1 spot with Tekashi 6ix9ine on his song TROLLZ. Megan Thee Stallion occupies the No. 4 spot, and Grande comes in at No. 9. The caption said, “Did that solo,” with a laughing emoji. A comment that appeared to be from rapper Lil Kim said, “I already told you you own the [crown].”

The account also posted a screenshot of a tweet from a fan saying, “Would be here for an Ariana and Cardi collab,” with the caption, “Oh the same girl who got mad over a grammy win?” The comment apparently referred to Cardi’s 2019 win best rap album over Mac Miller, who was nominated for the last album he created before his 2018 death.

A Twitter account also reminded the a 2014 incident where Cardi allegedly commented under a woman’s Instagram post, “If you take care of yourself and don’t worried about what’s wrong with other bitches he probably would have made it,” referring to the woman’s deceased son. “Maybe that monkey would have been alive.”

On Twitter, Cardi pushed back, saying the screenshots and finsta account are fake. She used Twitter’s new voice tweet feature and said, “I feel like I wanna cry and I wanna smile because something the devil tried to create… turned into a positive.”

She continued, “I’m seeing so much love from not only my fans but random people that aren’t fan accounts or pages, just having my back and realizing how fucked, people can do certain shit. It’s crazy how that shit backfired on the devil.”