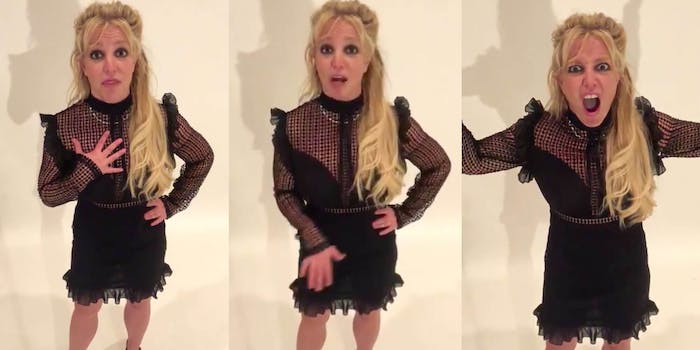 Britney Spears’ commemoration of the LGBTQ+ community during Pride Month has become a meme.

“To all my friends at the LGBTQ community,” she says in one of her iconic social media videos of herself.

“You guys bring so much heart, passion, and articulate everything you do,” she continues. “Because of you, I’ve had the best nights of my life. I love you so much it hurts.”

Her boyfriend, Sam Asghari, can be heard in the background disrupting her video by shouting “Go LGBTQ!” She playfully yells back, “Baby! Be quiet!” and makes a shocked face into the camera. The video has over 1 million views so far.

Once people noticed that she said “at the LGBTQ community,” fans had their ammo for a new meme.

“The way Britney said ‘at the LGBTQ Community; like we all live in a retirement home together,” @tkylemac tweeted.

User @heidiwood_ tweeted a remix version of “YMCA” with Spears now-immortalized one-liner added into the chorus of the song.

“Where is the LGBTQ community located?” another user, @mattjbernstein, asked.

“Hi guys I’m at the LGBT community, where are you ???” user @rhysjharding joked.

Spears’ love for the LGBTQ+ community is not new. She’s constantly been vocal about her support for the community and was awarded GLAAD’s Vanguard Award in 2018.