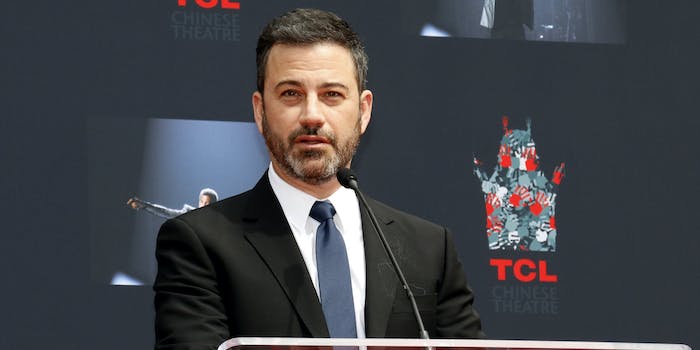 Jimmy Kimmel is under fire as audio circulated Tuesday on social media shows he used the N-word multiple times while imitating Snoop Dogg in the ’90s.

The audio reportedly came from a KROQ-FM Christmas parody album called A Family Christmas In Your Ass.

In a 2013 podcast with longtime comedy collaborator, Adam Carolla, according to the Daily Mail, Kimmel discussed his past use of the N-word. As that discussion went viral this week, Fox News surfaced the racist parody song.

From 1999 to 2003, Kimmel co-hosted The Man Show, a Comedy Central series that featured a mix of sketches and in-studio segments that’s received ample criticism over the years for its blatant sexism, racism, and transphobic depictions.

But amid a new reckoning with white comedians and performers donning blackface in mainstream entertainment over the last couple of decades, some people are scrutinizing several Man Show segments in which Kimmel wears blackface to portray basketball player Karl Malone and Oprah Winfrey.

Kimmel’s Malone got a recurring segment on The Man Show, in which he rambles about Beanie Babies, aliens, health, about the possibility of running for president, and he takes people on a tour of Lousiana; he also did a Christmas special in blackface as Malone while dressed up as Santa Claus. (Although he doesn’t use blackface anymore, Kimmel still does a Malone impression, including to Malone’s face in a 2018 interview with the real Karl Malone on Jimmy Kimmel Live.)

When portraying Winfrey, Kimmel’s focus is on mocking her weight as sketches show Kimmel (who is also donning a fatsuit when playing Winfrey) jogging on top of a woman to exercise; in another sketch, Kimmel’s Winfrey is using a sex toy.

Kimmel’s use of blackface on The Man Show isn’t an entirely new discovery. Some of the clips floating around on YouTube are more than 10 years old, and it’s even mentioned offhand in a recent New York Times article on the political legacy of The Man Show. But it’s resurfacing as entertainment—especially comedy—faces a reckoning about its use of blackface in television. Episodes of 30 Rock and With Bob & David featuring actors in blackface were removed from streaming platforms while several recent British TV shows have been taken out of circulation entirely. Even fellow late-night host Jimmy Fallon was scrutinized for appearing in blackface in a 2000 Saturday Night Live sketch. (Fallon apologized on both Twitter and The Tonight Show, and he further addressed the controversy in a New York Times profile.)

In a statement that New York Times reporter Dave Itzkoff shared on Twitter, Kimmel addressed his use of blackface, saying, “I apologize to those who were genuinely hurt or offended by the makeup I wore or the words I spoke.”

“I believe that I have evolved and matured over the last twenty-plus years, and I hope that is evident to anyone who watches my show,” he continued, adding that he “won’t be bullied into silence by those who feign outrage.”

Kimmel was recently announced to host the 2020 Emmy Awards. On his show’s most recent episode, Kimmel announced that he was taking the summer off to spend time with his family.

Correction: The KROQ-FM album is called A Family Christmas In Your Ass.