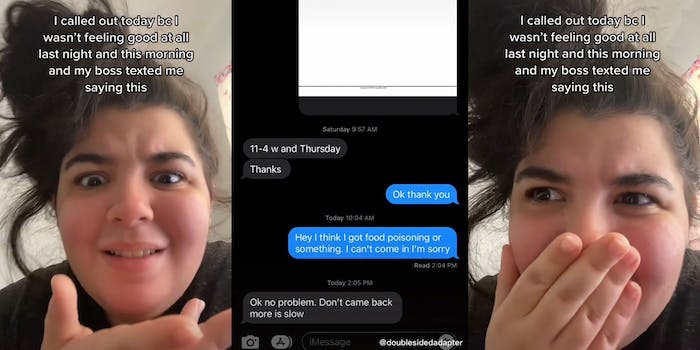 ‘Am I fired?’: TikToker shares text her boss sent her when she tried to call out sick, sparking debate

‘I don’t know why I have to justify that I was sick.’

On Thursday, a TikToker revealed screenshots of confusing texts from her boss seemingly firing her for calling out sick, sparking controversy about sick leave and workplace miscommunications.

The viral video, which has over 4.4 million views and was posted by TikToker D (@doublesidedadapter), shows the TikToker reacting to screenshots of a text message she allegedly received from her boss.

“I called out today bc I wasn’t feeling good at all last night and this morning and my boss texted me saying this,” the TikToker captioned the video.

“Hey I think I got food poisoning or something. I can’t come in I’m sorry,” the TikToker texted her boss, according to the screenshot.

“Ok no problem. Don’t came back more is slow,” her boss responded.

“Am I fired?” @doublesidedadapter captioned the video, confused by the text.

Viewers in the comments section of the viral TikTok debated whether the boss fired the TikToker in the texts, with some saying it seems like a misunderstanding.

In follow-up videos, the TikToker explains her boss doesn’t speak perfect English and that she doesn’t know for sure if the text means she is fired. Afterward, she texted him to clarify if she should come into work the day after but was still confused by his response, which said: “no came back no problem.” Some users thought the follow-up text confirmed she was fired.

“Is English his first language? Because if not – then he definitely meant don’t come back,” one user commented.

The TikToker posted her “last update” video on the situation, saying she hasn’t gone in person or called her boss to clarify if she was fired. She says she sent him a final text asking if she could come in, and he allegedly said no. However, she says she’s going to go to work tomorrow for a paystub and will find out what happened.

She also explains she has called out multiple times in recent months and that she wouldn’t be surprised if her calling out sick was an excuse to fire her because she is a bad employee. She says her job is boring, so she often doesn’t do well, and also says it is a second job and not very important to her.

“I definitely do not give this job my all like I should,” the TikToker shares. “I kind of like, feel so disconnected from my co-workers and this job in general.”

In the comments section, many users criticized the TikToker for not calling her boss to clarify if she was fired. Some users also criticized her for calling out sick multiple times.

“As a manager this infuriated me. Just ASK,” one user complained.

“Honestly I get it asking a few times if you have to come in comes off super unprofessional. The first call out fine but when u ask a few times it make,” another insulted.

“I was sick. I don’t know why I have to justify that I was sick,” the TikToker responded. “You don’t know someone else’s body. You don’t know if they’re actually sick or not…Seeing people be mad for me is such a weird feeling.”

However, others shared their similar experiences being punished at work for requesting sick leave and many came to the TikToker’s defense.

“Similar story happened to me – had Dr notes / proof I wasn’t lying about my swollen foot but was fired over text,” one user shared.

“Y’all saying ‘I was super sick and still went into work for an 8 hour shift’ or whatever are extra as hell. Everyone is different,” one user commented.

Many voiced concerns about the lack of paid sick leave and worker protections in the United States. Particularly concerning with the spread of COVID-19, workers have expressed fears over their co-workers being unable to take time off and putting each other at risk of illness.

The Daily Dot reached out to @doublesidedadapter for a response via TikTok comment.