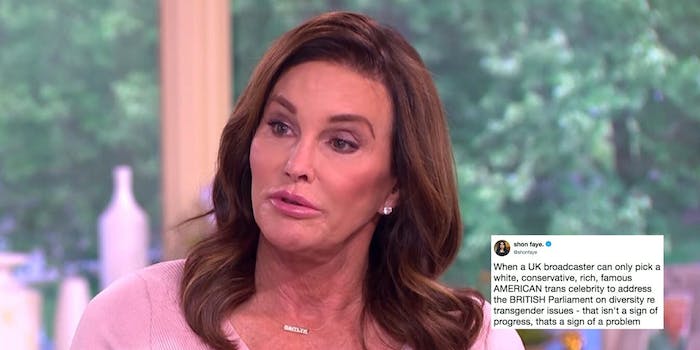 Why is Trump-supporting Jenner talking about diversity issues in the U.K?

Caitlyn Jenner is scheduled to deliver a keynote speech to the U.K. Parliament on diversity next week, and the internet has a few questions about the white, Trump-supporting transgender woman’s inclusion for the event.

BuzzFeed News reported on Friday that Jenner, 68, will give the keynote lecture on May 9 in the House of Commons for the third-annual annual event hosted by British broadcasting network Channel 4. British actors Riz Ahmed and Idris Elba delivered the keynotes in previous years.

A spokesperson for Channel 4 told BuzzFeed News that Jenner’s lecture will kick off a season of programming “on the topic of gender,” which Channel 4 is calling “Genderquake season.”

However, despite the effort Channel 4 has made to expand upon gender diversity, specifically for transgender representation, Jenner isn’t exactly known for her activism for trans people, and doesn’t represent trans people in the U.K.

Moreso, Jenner is known critically for her history as a lifelong Republican, even after coming out as trans, and for her support of President Donald Trump. Trump’s administration has continuously attacked protections for transgender people in education, public spaces, and military service.

On Twitter, critics further lambasted Channel 4’s decision to have Jenner speak, citing her lack of support of trans people.

Seriously @Channel4News This Is The Best You Can Do? How About Inviting Donald Trump Next Year to Talk About Women’s Issues and Equality? @BuzzFeedNews @BuzzFeed How About Having Trans Piioneers? Caitlyn Jenner Will Address The UK's Parliament On Diversity https://t.co/0SBPK6MTTO

This is shocking and disgraceful, even in today's climate of Orwellian madness. Jenner is a total abomination: https://t.co/GDH1gJ0Cdh

Shon Faye, a trans feminist writer, criticized Channel 4’s decision to host Jenner, tweeting that the problem with the reality star’s involvement “is not just about Jenner being completely out of touch with the current toxic conversation in Britain or 95 [percent] of trans people’s experiences. It is that journalists and politicians are seeing us, still, as sensational media objects. Not peers. Or hires.”

Do any #trans people actually want Caitlyn Jenner as a spokes person? I know it's not my place to say that she shouldn't be but from my lane there seems to be better spokes people such as Laverne Cox and Ian Harvey! #KeynoteOnDiversity

“The aim of the Channel 4 Diversity Lecture is to raise awareness and stimulate public debate about diversity issues,” a spokesperson for the broadcaster told BuzzFeed News. “Caitlyn Jenner is one of the most high profile transgender people in the world and her transition brought transgender issues into the mainstream, helping to stimulate debate and increase awareness.”