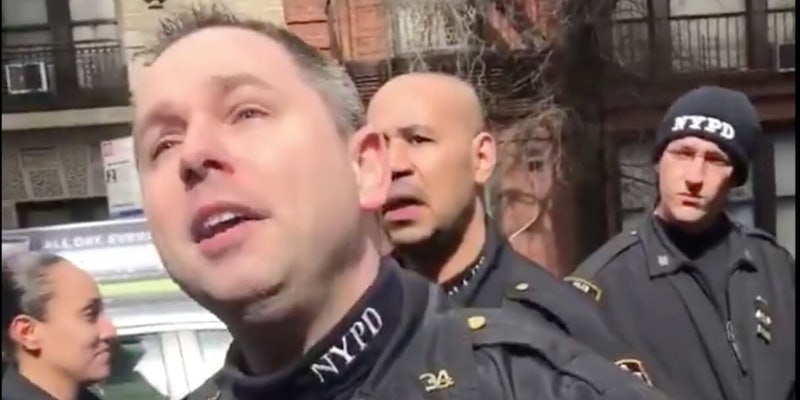 A recorded confrontation between New York police officers and a group of individuals went viral on Wednesday, leading “Bye Jackie Chan” to trend on Twitter.

The minute-long video was posted by Twitter user @andriannies early Wednesday morning, and it has since received nearly 4 million views.

In the video, which was originally posted as early as 2018, according to Heavy, an officer with the New York Police Department (NYPD) is talking to a group of individuals as other officers can be seen standing behind and around him. A person in the group accuses the officer of going to grab his gun—an accusation he denies. The conversation gets heated, and several people are yelling over one another. As the officer walks away with the other officers, one person in the group urges him to “take the badge off” so they can physically fight. Then, a person in the group yells “Bye Jackie Chan” at an Asian officer.

Many online agreed that both sides were wrong if the officers were indeed racially profiling the group—a common and documented practice.

“Thoughts on ‘Goodbye Jackie Chan’ trending. 1) Thank god he’s still alive. 2) Combating racism with racism only perpetuates the cycle. 3) Don’t pretend to support Asians just so you can take the opportunity to label another group of people as ‘the real racists,’” Twitter user @jun_julyaugust wrote.

Given that even celebrities are not immune to the coronavirus, people were understandably scared to see Jackie Chan’s name trending.

“I saw Bye Jackie Chan trending and I gasped thinking he died from the coronavirus, but this wholesome legend is still with us,” Twitter user @kchi96 wrote.

Chan is completely fine and has been urging his friends and fans to do their best to protect themselves and their families.

“Try not to go out unless it’s absolutely necessary. And if you do go out, please remember to wear a face mask; remember to wash your hands frequently; and remember to clean and disinfect your home regularly as well. Protect yourself and protect the people around you,” he wrote on his site.

While officials are urging the public to stay home and self-quarantine, the Centers for Disease Control and Prevention (CDC) recommends only wearing a face mask if you are sick or are taking care of someone who is sick to avoid a shortage.