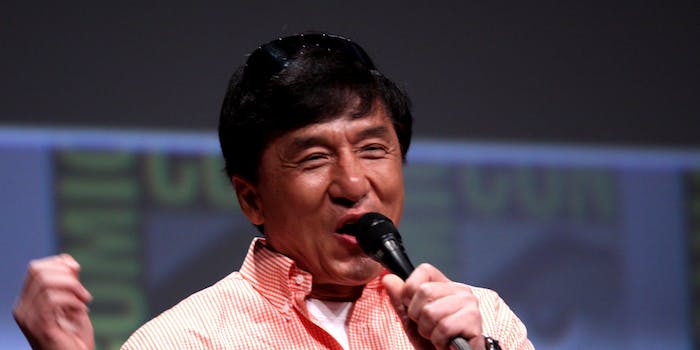 Jackie Chan has an amazing story about fighting Bruce Lee

Jackie Chan has been punched countless times in his career, but it was an accidental stick to the face in 1973 that he considers his best story ever.

Stunt god Jackie Chan has roller-skated through traffic, hung from a rope ladder attached to a moving helicopter, and been punched countless times over his 51-year film career.

But it was an accidental stick to the face in 1973 that Chan considers his best story ever.

The accident occurred on the set of Bruce Lee’s Enter the Dragon. Chan, who was 18 or 19 at the time, was a prison thug extra in the film. When the moment came for Chan to attack Lee, he got more than he bargained for.

“I run out and boom-pow suddenly my eyes are all black,” Chan said. “I do nothing. I just felt a little dizzy. I look at Bruce Lee and he doesn’t do anything. He looks at everybody, keeps acting, and turns around until the director says cut. Then he threw the stick down. Run to me and lift me up [saying] ‘I’m sorry, I’m sorry.'”

Chan recounted the story on George Stroumboulopoulos YouTube channel TheHour. It has been viewed more than 73,000 times.