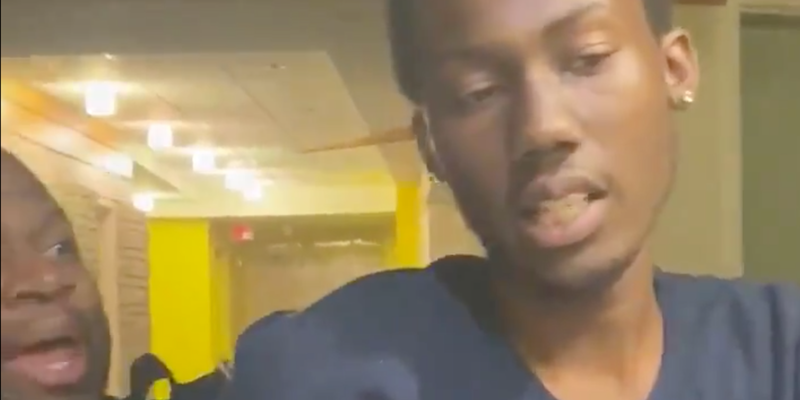 One officer threatened to Mase him.

Two police officers at a historically Black college in Greensboro, North Carolina, are on administrative leave after a video showed them arresting a student for trespassing as he was entering his own dorm room.

The Winston-Salem Journal reports that at around 1:30am on Wednesday, North Carolina Agricultural and Technical University student Verdant Julius was retreating to his dormitory with two of his friends when two police officers stopped the group.

The school previously shut down classes, citing coronavirus concerns, but granted students until Sunday to clear their dorms.

The officers requested Julius, the sophomore class president, and the other male student to provide their student IDs. The students complied with the demand. The officers told the two students to swipe their cards to prove their enrollment. The officers then ordered Julius’ female friend to leave because she didn’t reside in the dorm, according to a student petition that gained nearly 8,000 signatures by Friday.

“Verdant Julius asked the campus security guard and police officer for an explanation,” the petition states. “The officer responded to this request by saying, ‘If you take one step closer, I am going to have you arrested for obstruction of an investigation.’ This was the first time the officer informed Verdant Julius and the other two students that an investigation was in progress.”

The 45-second video of the incident shows Julius being arrested. It shows the officers trying to handcuff Julius, and one of them threatens to Mase the student. Julius replies, “You’re honestly ridiculous.”

The university’s police chief, Charles Wilson, said Julius was charged with resisting, delaying, or obstructing of a public officer and trespassing. Julius was released on a written promise to appear in court. The university did not immediately identify the two officers.

“This whole situation could have been avoidable, as everyone is in a rush to pack and evacuate campus due to the pandemic of Covid-19,” wrote sophomore Mantryll Williams, who filmed the encounter, on the petition page. “Police are here to protect and serve, (and) slamming to the ground should never be a 1st, 2nd, or 3rd thought of a police officer to arrest someone not posing a threat and over a campus ID.”