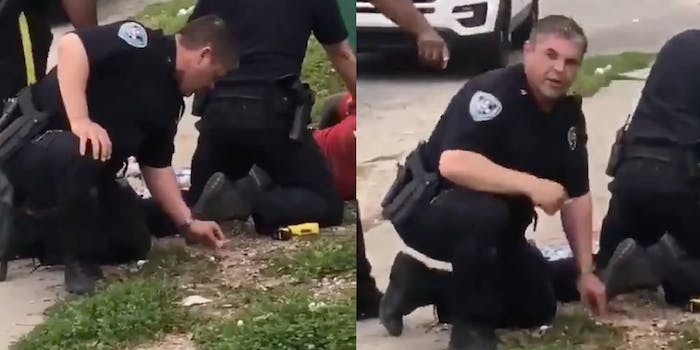 The man can be heard screaming 'I'm not a crackhead' in the video.

A now-viral video shows police officers in Louisana detaining a Black man and then proceeding to allegedly plant something near him, as he screams, “I’m not a crackhead.”

The video, taken by Twitter user Simply Jasmine K, was posted to Twitter Monday and has already received more than 600,000 views.

In the 30-second video, one officer can be seen holding down the detained man on his side. The man can be heard screaming, “I’m not a crackhead!”

Another officer is on his knees searching the ground next to the man. He then can be seen grabbing alleged drugs from a third officer and then placing it on the ground before picking it back up. Bystanders took notice.

“He just put it! Yeah I’m sure,” says the woman filming the incident. “He put it!”

After the officer realizes he’s being recorded, he walks toward the camera.

“Get out of the way! Go inside, go inside!” one woman is heard screaming as the officer rushes toward them. The women start running, and the video ends abruptly.

While the Twitter user who posted the video did not respond to the Daily Dot’s request for comment, she said in a follow-up tweet that the incident took place in Jefferson Parish, a parish in Louisiana.

People online called for the officer in the video to be fired.

Some expressed that those recording the incident had every right to do so and shouldn’t have had to run away.

“She didn’t even have to leave. She had the right to be there she wasn’t interfering with his work,” wrote one. “And he had no right to take or go threw her phone.”

While some questioned why they announced the woman was recording the officer, many felt it may have saved the man’s life.

“She was trying to help the man before they arrested him. By telling the cop they got him on video BEFORE he planted it, he knew he couldn’t go through with his plan. Im sure she didn’t intend on the cop chasing them down,” Twitter user @eleven8 wrote.

The Daily Dot has reached out to the Jefferson Parish Sheriff’s Office.