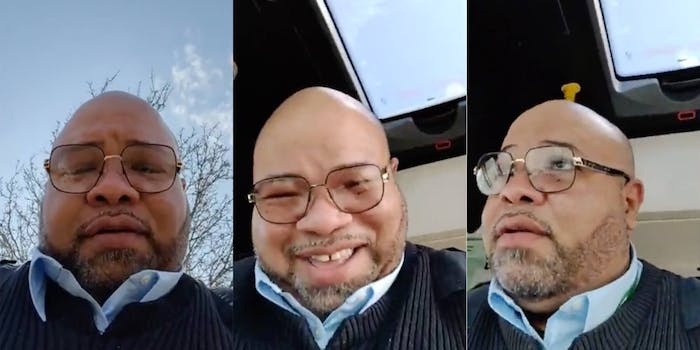 A Detroit public bus driver who posted a Facebook video to vent about a passenger who coughed on the bus without covering her mouth died from the coronavirus.

Jason Djinfiniti Hargrove posted the video about two weeks ago, and it has since been viewed more than 150,000 times.

At the beginning of the video, Hargrove is seen recording and walking as he speaks.

“This coronavirus shit is for real and we out here, as public workers, doing our job trying to make an honest living to take care of our families,” he says. “But for you to get on the bus and stand on the bus and cough several times without covering up your mouth and you know that we’re in the middle of a pandemic… That lets me know that some folks don’t care or they don’t give a fuck.

“I ain’t blaming nobody but the woman that did that shit,” he says later in the video. He fell sick a few days after posting the video, according to the Daily Mail. “Y’all need to take this shit seriously.”

He also goes on to speak about the pressure to maintain professionalism.

“I’m mad right about now because that shit was uncalled for,” he says. “And I’m trying to be the professional that they want me to be and I kept my mouth closed.

“I feel violated for the folks that was on the bus when that happened,” he adds, highlighting that other passengers were exposed, as well.

Hargrove died on Wednesday from coronavirus.

According to the union leader of the bus drivers of Detroit’s Department of Transportation, about 100 of the 530 the city’s drivers are in quarantine because of potential exposure to coronavirus.

Comments on Hargrove’s video were initially of many empathizing with him about the situation. Since news broke of his death, people have been leaving messages of condolences.

“This is so sad and unnecessary,” wrote one user. “Thank you Mr Hargrove for your service and your life.”

Detroit’s buses are currently working under a tightened schedule owing to measures to prevent the spread of the coronavirus. With more than 10,000 cases reported, Detroit is currently one of the states most deeply affected by the virus.