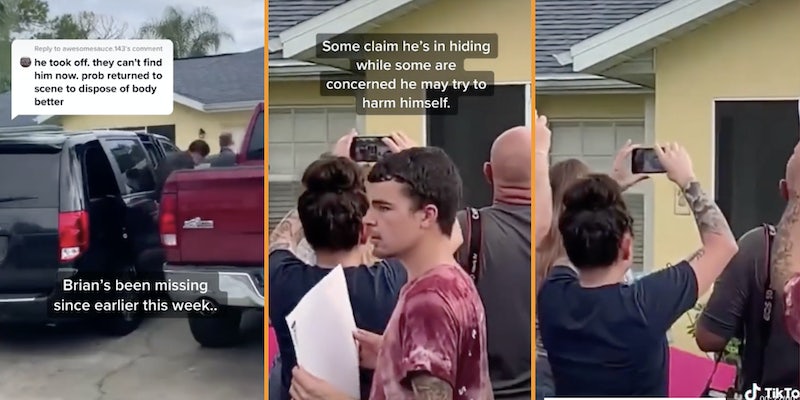 ‘We’ll be out here everyday’: Brian Laundrie’s family hounded by media and protesters outside their home in viral TikToks

'I just wish all those people would stop harassing the family.'

TikTok videos showing footage of Brian Laundrie’s mother being harassed over her son’s suspected involvement in the disapperance of Instagram influencer Gabby Petito have gone viral—highlighting the increased attention the case has been garnering in recent days.

The videos, coming courtesy of the @nerdyaddict account, have each generated more than 2.5 million views in their brief time on the platform, giving an indication as to the interest in the case that the Daily Dot first reported on last Thursday.

It appears that the house in the TikTok videos is the same one featured in recent news coverage about the investigation, including the FBI’s execution of a search warrant there on Monday, in which Laundrie’s mother and other family members have been entering and exiting. It also appears, judging from both the TikToks and the news coverage, that media members and protesters have stationed themselves outside the house.

Laundrie is officially a person of interest in Petito’s disappearance. Investigators are currently working to confirm that a body found in Wyoming on Sunday is Petito, with an autopsy scheduled for Tuesday. According to various news reports, family members, including Laundrie’s mother, have maintained they’re unaware of Laundrie’s current whereabouts.

The first viral TikTok video from the house, posted Saturday, noted via its caption that “Florida police and the FBI are looking for him, but he’s still not wanted criminally.” The 24-second clip shows someone pulling into the driveway and moving toward the front door of the house, with a small group of people yelling, “Where’s Gabby?” and “Laundrie family, where are you?”

The video shows more than one person recording what’s transpiring on their phones, and at least one person brandishing a large sign directed toward the house (though it’s unclear from the video what the message on the sign actually is). One person shouts that the group would continue to camp outside of the home “everyday.”

One comment under this video read, “I just wish all those people would stop harassing the family.” In response to this, the TikToker uploaded a second, shorter video on Sunday.

That video then shows someone asking a woman the TikToker claims (via caption) is Laundrie’s mother, “Hi, Roberta, could I ask you a few questions? Why are you covering up for your son? Why aren’t you helping with the police?”

That clip came from a nearly six-minute Sunday afternoon Fox News segment story on the case, in which correspondent Charles Watson framed the segment as “an encounter between our Fox Digital team and Laundrie’s mother.” The editors presented it as the journalists “confronting” her in the chyron that ran with the story.

The TikTok’s not the only attention that Fox News is getting over its coverage on the Petito case. As the Daily Dot reported Monday, network commentator Raymond Arroyo dubbed the news coverage of Petito “a huge distraction” from political issues going on in the country, arguing, “With all that’s happening in the world, what’s happening in our southern border and abroad and at home, I think this entire story is a huge distraction.”

Other news coverage has highlighted protesters at the house who are expressing their opinions on the investigation, including a CBS 12 news story from Friday that detailed children carrying signs reading, “Bring Gabby home,” “Where is Gabby?” and “The truth will come out, where is she?” That story also noted one man with a bullhorn yelling “Let investigators know what you know” and “Do what’s right, speak to authorities” to those in the house.

A number of commenters on the second TikTok video appeared to be pro-harassment, indicating they believe the family enabled Laundrie’s escape and qualify as accomplices.

“Harass harass harass,” one encouraged. “Don’t leave them alone and don’t let them sleep. These people need to be taken down. What happened to Gabby should happen to all.”