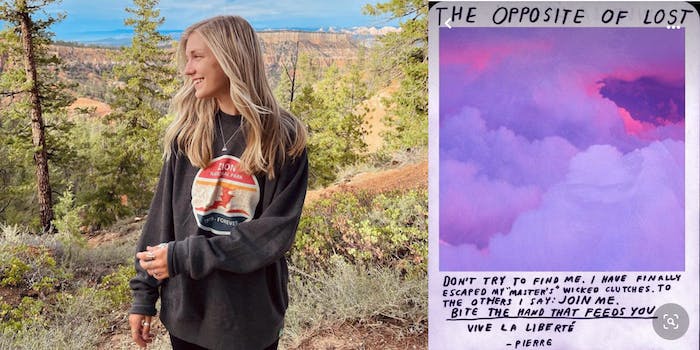 One of the posts features a gravestone.

The account thought to be Laundrie’s, @blaundrie1197, posted several images and messages that people found disturbing in light of the ongoing developments in the Gabby Petito case. Petito, a 22-year-old Instagram influencer, went missing recently in the midst of a cross-country road trip with Laundrie, her fiancé. She’d been documenting the journey on her Instagram page, and in the weeks since she was reported missing, internet users obsessed over the case. Online detectives have been combing through each post, interaction, and tiny hint to track down every fragment of information regarding the case.

The Pinterest page is the most recent alleged discovery. A page belonging to @blaundrie1197 was unearthed by online sleuths, who—based on its shared albums, one of which is connected to Petito and one of which is connected to a Roberta Laundrie, who shares a name with Laundrie’s mother—determined it belonged to Laundrie. After combing through posts, people located several pins they call “disturbing.” The Daily Dot’s review of Laundrie’s Pinterest page showed that many of the shared pins are no longer accessible.

The first pin, an image of which has since been shared across social media, shows an odd sketch sporting images of ghostly figures, text, and a gravestone. People online fixated on the text scattered throughout, as well as the gravestone, to draw conclusions. Portions of the text read sentiments like “let her go, let her go, God bless her, wherever she may be,” and “she’ll never find a sweet man like me.” The gravestone, as noted by numerous users, simply reads “my baby.” The quotes appear to come from “St James Infirmary Blues,” a 1943 song from Cab Calloway. The images, and the song, appeared in an old episode of Betty Boop.

Another heavily discussed post shows an image of pink- and purple-lit clouds with text at the bottom. “Don’t try to find me,” the text at the bottom reads. “I have finally escaped my ‘master’s’ wicked clutches. To the others I say: JOIN ME. Bite the hand that feeds you. Vive La Liberte.” The quote is attributed to a “Pierre.” The image reportedly stems from a 2006 missing dog poster seen in Oregon, according to the Sun.

The vast majority of Laundrie’s Pinterest page, as reported by the Sun, is dominated by images of nature, his own sketches and paintings, as well as “nomadic-lifestyle inspired posts.” A shared account titled “Life Goals,” has also garnered attention, primarily due to the fact that it is shared with both Petito and Roberta Laundrie.

Another page has sparked interest among self-proclaimed online detectives, this one titled “Oh Baby.” The page sports images of baby attire, which sparked theories that Petito may have been newly pregnant, a completely unconfirmed detail.

Petito and Laundrie set out on their cross-country trip several months ago. They documented the journey on both of their Instagram accounts before posts abruptly stopped appearing. Laundrie’s most recent Instagram post went up on Aug. 13. Posts to Petito’s account persisted for several days after Laundrie’s page went dark, which some people see as suspicious. Petito’s followers have shared theories that several of the most recent posts to her page felt off, due to the lack of location tags and the suspicious timing.

A man in Moab, Utah, called police on Aug. 13 to report a domestic violence situation between Laundrie and Petito. The man reported seeing “Laundrie slap Petito” while the couple was in town and later reported seeing him “hit her” as they entered their van to leave the area, according to the Associated Press. A Moab police officer later pulled the van over after it “was seen speeding and hitting a curb near Arches National Park.” Body camera footage of the incident showed a distraught Petito, who noted that Laundrie was upset over her attempts to clean their shared vehicle and said she hit him. Laundrie, meanwhile, was seen as very calm while he talked with the police. The two were ultimately separated for the night.

Laundrie returned to Florida, where the couple set out from, on Sept. 1. He returned in the white van the two had been driving cross-country, but Petito was nowhere to be found. Her family, following repeated attempts to learn her whereabouts from Laundrie and his family, reported Petito missing on Sept. 11. A few days later, on Sept. 14, Laundrie reportedly informed his family that he intended to go hiking in Carlton Reserve. He has allegedly not been seen since.

A body confirmed to be Petito’s was found at a Wyoming national park on Sept. 19. A coroner determined that she was “killed by another person,” according to AP. A cause of death has not yet been released.

Laundrie is not currently a suspect in Petito’s disappearance, but police have labeled him a person of interest.