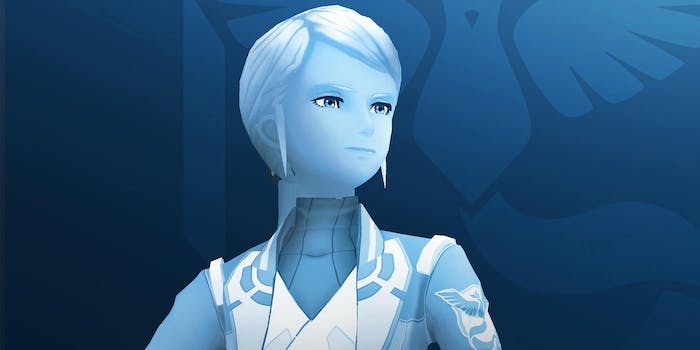 Blanche uses the pronouns 'they' and 'them.'

Blanche, a major Pokémon Go character, was just confirmed to use the pronouns “they” and “them,” making them the first nonbinary character in Pokémon.

Blanche, the leader of Team Mystic, was referred to with the “they” pronoun in a recent Pokémon Willow Report. The designer of the character also confirmed that Blanche is gender ambiguous on Twitter, according to Nintendo Soup.

“Blanche’s gender confirmed as ‘whatever impression or feeling you get from the design,'” the designer tweeted.

Pokémon fans were quick to applaud the step toward inclusivity on Twitter.

“Can we talk about the fact that Blanche identifies as ‘they/them’ and is canonically the first non-binary character in Pokemon canon, and they didn’t have to make a big deal out of it? This the kind of inclusivity i like,” Rowan Quinain tweeted.

So, uh, Pokémon GO just went and used singular they for Blanche's pronouns. In an in-universe story.

Which is doubly appropriate because Blanche, while a real name, means white, aka the non-binary color on the trans pride flag.

I remember seeing people get worked up about missed non-binary opportunities with Ilima from SuMo when he was revealed, so seeing Blanche with they/them pronouns is a step forward for Pokemon. Hope we keep walking that path for SwSh.

There’s been a recent push for more inclusivity in gaming. An EA Global Consumer Insight’s study from earlier this year found that 56% of gamers thought it was important for companies to make their games more inclusive, according to Screen Rant.