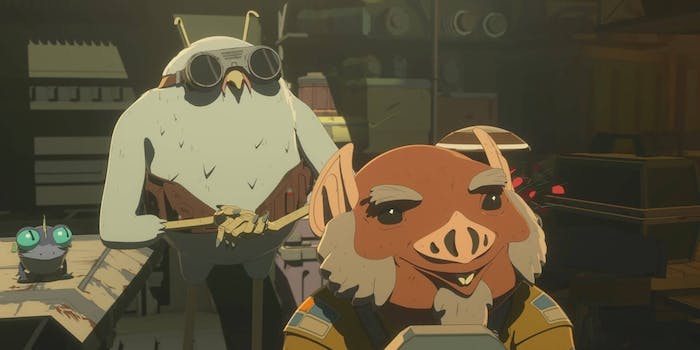 'They’re absolutely a gay couple and we’re proud of that.'

The track record of LGBTQ representation in the Star Wars universe is abysmal, something that’s occurred in canonical comic books and tie-in novels—but pretty much eluded the films and TV shows until now.

Star Wars Resistance, Disney’s animated Star Wars series that’s set around the same time as The Force Awakens and The Last Jedi, is about to start its second and final season. Ahead of the premiere, the Star Wars podcast Coffee With Kenobi spoke with several of the show’s cast members and executive producers Athena Portillo, Justin Ridge, and Brandon Auman about what fans can expect from season 2.

At the beginning of the interview, Coffee With Kenobi’s Drew Taylor asked about the relationship status of Orka (Bobby Moynihan) and Flix (Jim Rash), the owners of the Colossus’ Office of Acquisitions who are also something of comic reliefs on Resistance.

“They’re absolutely a gay couple and we’re proud of that,” Auman added.

Taylor brought up Ridge and Auman’s comments to Moynihan a short time later, who seemed relieved and excited that he had the go-ahead to talk about it.

“Oh, I’m so happy we’re allowed to say it,” Moynihan said (around the 15:27 mark). “I have had a sentence prepared for a year and a half if someone would finally ask me. I would say, ‘All I can say is when Flix says ‘I love you,’ Orka says ‘I know.’”

“It’s the best,” Moynihan added. “ They’re the cutest and their little family: GL-N the robot, Bitey the gorg. They’re adorable.”

Hints about the two non-human characters being in a relationship with one another were there. Prior to Ridge and Auman’s confirmation, Orka’s Star Wars Database page included the word “partner” when referring to Flix. It’s also inferred in season 1 episode “Dangerous Business,” in which Orka and Flix get Kazuda Xiono (Christopher Sean) to watch their shop.

Their dynamic is something akin to an odd couple: They often butt heads, but they also like and respect one another.

On the one hand, the fact that a gay couple is now confirmed to be featured in a Star Wars TV show—particularly an animated TV show, where LGBTQ representation has been historically been far less progressive–is a step toward greater representation and progression. For instance, the creators of Legend of Korra couldn’t explicitly confirm a relationship between its two female leads in the series finale. Disney removed a brief scene of two women falling in love (thanks to a love potion) in Gravity Falls (but it later allowed two male characters to say they loved each other in the series finale). And while Steven Universe featured the first same-sex wedding in an animated show last year, it took creator Rebecca Sugar being willing to walk away from the show to make it happen.

Although Moynihan and Resistance’s executive producers are thrilled to finally talk about that relationship, it’s ultimately treated just like any other relationship on the show—and Resistance likely has a bigger audience than many of the Star Wars comics and books that feature LGBTQ characters.

But on the other hand, it’s also a small gesture (with two fairly minor and non-human characters) in a franchise that has yet to include any LGBTQ representation in the films, leaving any hints of that to subtext or press interviews. And it took until after the show’s cancelation—it’s ending after season 2, which premieres on Oct. 6—for executives to confirm Orka and Flix’s relationship. From a cynical standpoint, the people who might complain about having a gay couple in a Star Wars TV show can’t call for the show to get canceled because well, it’s ultimately ending.

As for the odd couple’s relationship in season 2? It might not amount to anything more explicit than what we’ve already seen on Star Wars Resistance. So while it’s definitely a cool tidbit to have in a galaxy far, far away, it’s also a small gesture—and with no limits to that galaxy, it can also do so much more.