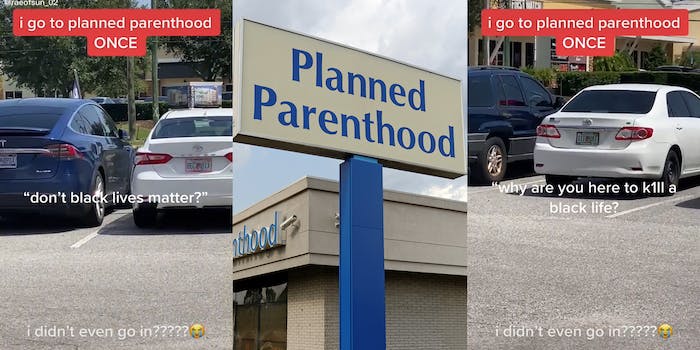 ‘Do Black lives matter, or do they not?’: Black woman gets harassed after parking near a Planned Parenthood

Per its website, Planned Parenthood provides “preventive care, including birth control, testing and treatment for sexually transmitted infections, and screenings for cervical and other cancers.”

In fact, while Planned Parenthood claims only 3% of its income comes from abortions, even the most generous calculations place Planned Parenthood’s abortion income at just over a third of its total revenue, according to the Washington Post.

However, that hasn’t stopped many from thinking of the organization as solely abortion providers. As a result, many anti-choice protesters frequent Planned Parenthood locations, standing outside the facilities to warn potential visitors about the supposed dangers of abortion.

Some have even threatened violence against these facilities. ABC News reported in 2019 that, in the previous year, the National Abortion Federation tracked “1,369 reported violent acts” against abortion providers, “including 15 instances of assault and battery, 13 burglaries, 14 counts of stalking and over a thousand episodes of illegal trespassing.”

A Planned Parenthood protest encounter recently went viral on TikTok, amassing over 288,000 views. In the video, user Raè (@raeofsun_02), who is Black, documented her experience of parking near a Planned Parenthood, even though she reportedly did not enter the facility.

“Why are you here to kill a Black life?” the protester answers.

“I go to planned Parenthood ONCE … I didn’t even go in?????” Raè questioned in the text overlay of the clip.

“These higher unintended pregnancy rates reflect the particular difficulties that many women in minority communities face in accessing high-quality contraceptive services and in using their chosen method of birth control consistently and effectively over long periods of time,” the Institute continues. “Moreover, these realities must be seen in a larger context in which significant racial and ethnic disparities persist for a wide range of health outcomes, from diabetes to heart disease to breast and cervical cancer to sexually transmitted infections (STI), including HIV.”

Back on TikTok, users shared their thoughts on Raè’s experience, pointing out how some people only tout Black Lives Matter “when it’s convenient for them” and how Planned Parenthood offers a wide range of services.

“Do they realize you can get more than just abortions there?” one user asked.

“Nah this is the ONLY time they say [Black Lives Matter] in full,” another added. “They never gave a damn and referred to it as ‘BLM’ like that was all it was worth.”

Some of the top comments express shock at what the protester said.

“AINT NO WAY SHE SAID THAT???” the top comment reads.

“Oh nah, the audacity of some people,” another said.

Others detailed their own Planned Parenthood experiences.

“I needed an escort to go in there was an unruly crowd,” a user recalled. “I just needed a pap test. I was so scared.”

“My mom had kidney failure while being pregnant so she wanted to get an abortion bc there were going to be many complications. And they were telling her how horrible she is for getting rid of her baby, all this bad stuff,” a second remembered. “My mom wanted the baby, with dialysis and everything it wasn’t right.”

The Daily Dot reached out to Raè via TikTok comment.