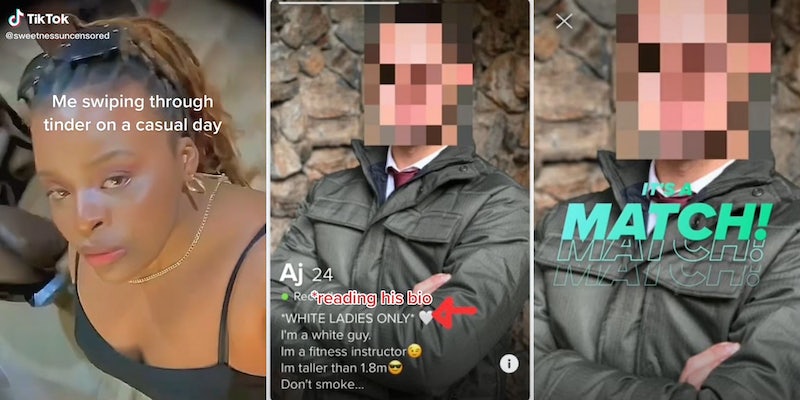 A Black TikToker accidentally matched with a guy whose Tinder bio says “WHITE LADIES ONLY.” The user chronicled the intense saga in a viral TikTok video.

“He really went out of his way to censor his face on his whole profile I wonder why,” the user @sweetnessuncensored wrote via text on the video, noting the large pixels covering the man’s face on his Tinder profile.

In an attempt to take a photo of the man’s profile, the user’s finger slipped and accidentally swiped right.

To her surprise, it was a match.

“Well I’ll be damned,” she messaged the guy who seemed adamant about only matching with white women.

He left her without a response.

“My 13th reason! homie didn’t even have the decency to unmatch immediately after,” she captioned the video.

Her TikTok received over 2.4 million views, with several users eager to know what happened next.

“Please tell me he replied,” one user said.

“Girl I need to know what happens next,” another said.

The user shared a follow-up video stating that she has no updates because she unmatched with him a few days later.

“Someone should go check up on AJ. Like if you know him personally, check up on the homie,” she jokingly says.

Several others shared similar experiences in the comments.

“One time i matched with a guy who said he only likes fit girls… im 230,” one user said.

“I accidentally swiped right on this conservative with a confederate flag in one of his pictures and we matched…they really be on something else,” another said.

Many users attributed the match to him simply swiping right on every profile he comes across.

“Def one of those guys that just swiped right on everyone without looking,” one user said.

“Thats the ultimate proof that guys swipe right literally everyone and then sorting out the matches,” another said.

The Daily Dot reached out to user @sweetnessuncensored via TikTok comment.