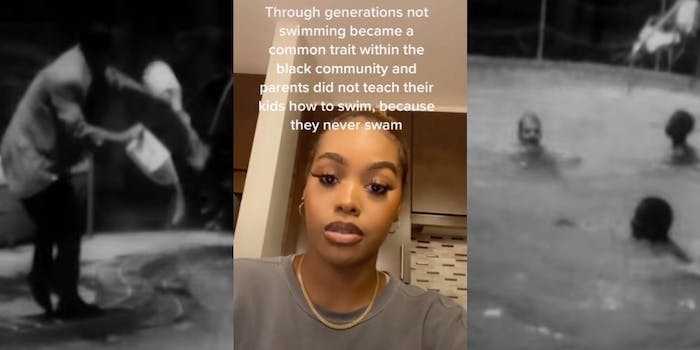 'My grandma didn't swim for this exact reason.'

A TikToker explained how the “Black people can’t swim” stereotype is directly linked to segregation, reminding viewers that the racialized convention is “not a stereotype; this is history.”

Model Maya Echols (@mayaechols), who has gone deep into historical Black trauma on her TikTok, posted a video explaining the racial history around the loaded notion that Black people will not or cannot swim. The video has 3.7 million views since Echols posted it in December.

The caption for the video reads, “My grandma didn’t swim for this exact reason; let’s not act like black people got their rights a long time ago.”

“Aside from the fact that slaves were chained together and throw into the ocean off of ships, in the 1920s, when Jim Crow laws were in full effect, public swimming facilities such as pools and beaches were segregated by race,” she explains.

“However, Black people still faced violence and harassment within their own community,” she continues. “White people would come to these public swimming pools and throw cleaning supplies or acid into the pools while Black children or families were swimming in them.”

She explains that many Black parents hadn’t taught their kids how to swim simply because they (and generations before them) were violently discouraged from visiting pools and public beaches unless specifically assigned for Black use.

The Associated Press has footage from a 1964 story about a swimming pool protest in St. Augustine, Florida. It shows the owner pour chemicals into the water to force them out of the pool.

Vox also chronicled the “wade-ins” that occurred during the Civil Rights era, fighting against the “articulation” of white supremacy “through leisure,” as explained by Indiana professor Rasul Mowatt in the piece.