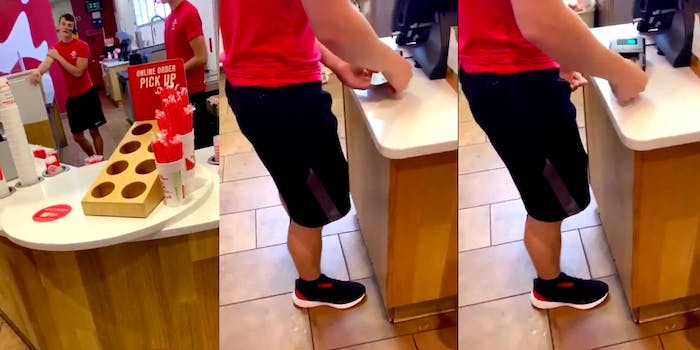 It scanned as real money after her parents confronted them in a viral video.

A Black girl was accused of using a counterfeit $20 bill at a Smoothie King in Harrisburg, North Carolina.

According to a tweet by her brother, Zavian Bell, the girl called her parents to “go through the drive-thru and buy a smoothie with the same EXACT $20 bill.” Her brother posted a video of their parents walking into the store and confronting the employees after successfully paying with the bill in the drive-thru.

“My little sister was falsely accused of using a counterfeit $20 bill at Smoothie King (same thing George Floyd was accused of),” Bell tweeted, along with two videos that were viewed over 1 million times before being restricted.

In the footage, what seems to be the girl’s parents enters the store with their daughter. The girl’s mother, who claims to be a government official, confronts the two white male employees standing behind the counter. They tell her that after the money was used a second time, they just let the “counterfeit” money go though.

She questions them to explain how they deduced the money was fake, and one of the employees shows her how he uses the counterfeit money detector. As the money passes through, the machine lights up green, meaning the bill was not counterfeit. He explains that when he ran it through the first time, it was showing up to be a counterfeit bill.

The presumed dad of the girl pays for the drinks and tells the man behind the counter, “That’s one of the most insensitive things you can say right now.” The employee stammers and says that he understands.

After posting the video and the location of where the incident occurred, the franchise reached out to Bell publicly and apologized for the actions of its employees, writing in a tweet, “We have a zero tolerance policy for racism and discrimination at Smoothie King and are actively investigating this incident.”

In a separate tweet, it reiterated its zero tolerance for racism and stated it has “come to a resolution with LaWanda.” Smoothie King also said it identified “a training opportunity in the store she visited.” The two employees have not been fired, but they will be educated on racial sensitivity, according to a statement it released on Twitter. This location also found the counterfeit money detectors to be “unreliable” and “will cease from scanning bills.”

The Daily Dot has reached out to Zavian Bell and the company of the counterfeit money detector believed to be the one seen in the video.