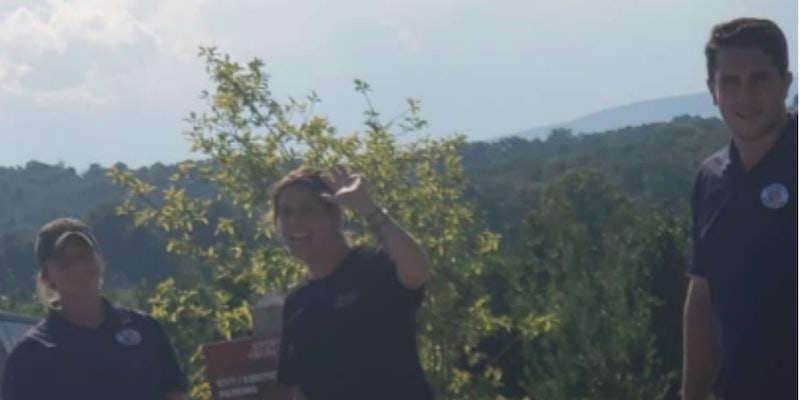 Black couple says they were accused of stealing during marriage proposal

'I have never been so humiliated in my life.'

Marriage proposals usually go viral for being over the top and romantic, but one couple’s proposal is making its rounds on the internet for all the wrong reasons.

Cathy-Marie Hamlet alleges that she and her now-fiancé Clyde Jackson were accused of stealing at Angry Orchard Brewery in Walden, New York, at the exact moment Jackson was proposing to her.

In a now-viral Facebook post, Hamlet explained that a white security guard approached her and Jackson–who had intentions of proposing at that very moment–and asked to check his back pocket because the security guard “was told that [Jackson] stole a T-shirt from the gift store.” Jackson complied and emptied all of his pockets, all while trying to keep the engagement ring hidden from Hamlet’s view.

“‘I know you’re just doing your job, but I can’t help but wonder if this is because we’re Black. We’re the only Black people here at your establishment,'” Hamlet recalled telling the security guard.

The security left the scene, only to return moments later, in the midst of Jackson’s proposal speech, and requested Hamlet empty her bag because she “was told that he gave it to you, and you put it in your bag.”

“As a doctor, I have no reason to steal a $28 T-shirt when I could afford to buy ALL of the T-shirts in their gift shop,” Hamlet wrote.

The security guard left after nothing was discovered but later returned, for a third time, to accuse everyone in the couple’s party of eight of stealing.

“I’m sorry, I didn’t realize you all were a part of the same party. I have to check all of your purses and pockets,” Hamlet recalled the security guard saying to the six others in their party.

Hamlet said the security guard was then joined by five others and they “started getting aggressive.” One of the guards threatened to call the police on the group.

Hamlet said she asked them to review the security camera footage in hopes that they would lay off after seeing that no one in their group had stolen anything. Hamlet alleges that the security guards then started taking pictures and recording videos of the group–even taking a photo of Hamlet’s license plate.

Ultimately, Hamlet said the group decided to leave “rather than be attacked by the multiple security guards of Angry Orchard.” She later published a photo which showed a few of the security guards taunting Hamlet and her party by waving goodbye with smiles as they drove away.

“I have never been so humiliated in my life, myself and some of my friends left Angry Orchard in tears. On what was supposed to be one of the best days of my life, I was chased out of Angry Orchard by security who followed us all the way to the parking lot,” Hamlet wrote.

Angry Orchard addressed the allegations in a statement given to People Magazine.

“We reached out and spoke directly with the guest involved to express our apology and offer to make it right. Our security team approached a group of guests based on what they thought was credible information at the time. We believe that we mishandled the situation and we’re now working on additional training for our team to prevent something like this from happening in the future. We’re deeply sorry. The situation didn’t reflect our values of respect and creating a welcoming environment for our guests,” the company wrote.