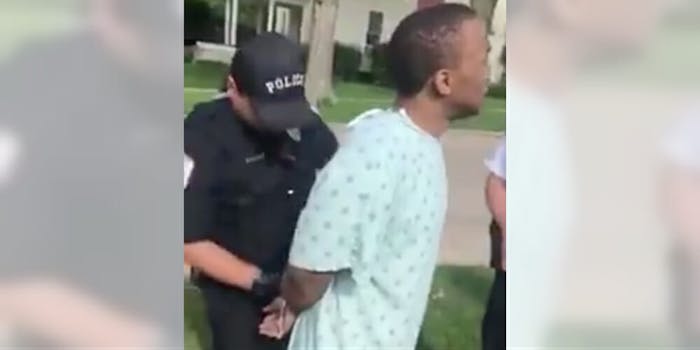 Shaquille Dukes says he suffered from a seizure and asthma attack while in the cop car.

A Black hospital patient named Shaquille Dukes can be seen in a now-viral video getting arrested after being accused of attempting to steal the hospital IV and sell it on eBay.

The incident occurred on June 9, but it only recently went viral via Twitter.

Shaquille Dukes was admitted into the hospital for double pneumonia. He received doctors orders to walk around the hospital.

He was stopped by a racist security guard, who called racist cops. He was arrested and accused of trying to steal the IV machine. pic.twitter.com/LmKxlJvgiA

The 24-year-old also posted about the incident on Facebook shortly after it happened.

Dukes wrote that he was being treated in the FHN Memorial Hospital in Freeport, Illinois, for double pneumonia. He had permission from the medical staff to walk around outside, just not leave the property.

“I was stopped by an overzealous, racist, security officer, who claimed that I ‘was trying to leave the hospital to sell the IV equipment on eBay,'” Dukes wrote.

When the security guard called Dukes over to his car, he took him off hospital property, according to the Journal-Standard.

Dukes said the security officer then called the police, who Dukes claims is Sergeant Jeff Zalaznik with the badge number of 116. Dukes said both he and his brother, who was accompanying Dukes while he was in the hospital, were arrested for attempting to steal the IV equipment that was still inserted into Dukes’ arm.

“Officers stood by and watched while my IV was removed on the sidewalk, and it was NOT by a doctor,” he wrote.

After telling Zalaznik why he was in the hospital, he claims the officer’s words were, “I don’t care why you’re here, you’re going to jail.”

Dukes claims the officers took his rescue inhaler away from him when arresting him.

“While in transit I began to have a seizure, and subsequently an asthma attack. I pleaded with officers for almost four minutes to retrieve my inhaler from the transporting officer, and finally, when I became unresponsive, it miraculously appeared,” he wrote.

Come to Freeport on Vacation and leave on Probation. This is truly one of the most racist cities in America. I was…

Dukes ended up being charged with disorderly conduct, not attempted theft, the Freeport police Lieutenant Andrew Schroeder told the Journal-Standard.

“The issue here is that his actions were why he was arrested,” Schroeder said. “Had they been able to engage in a civil discourse with hospital security, we wouldn’t have been called at all.”

Dukes filed a formal complaint with the city, according to the news outlet.

“I make this post not for pity, but as a beacon of hope for all black and brown minorities dealing with the City of Freeport, we do not have to take this shit any longer!” Dukes wrote in his Facebook post. “This ends today, anyone who sees this, and has been served an injustice or was a victim of a crime initiated by Freeport PD, please reach out.”