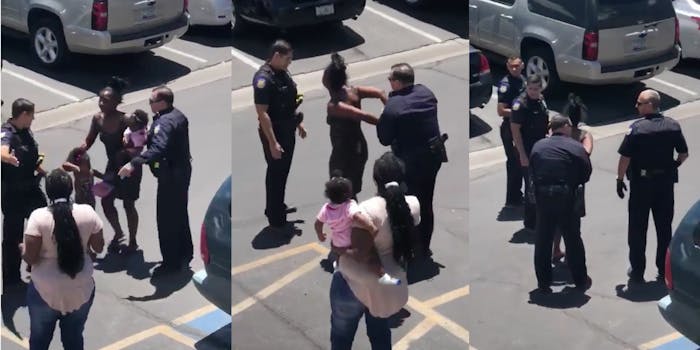 'You're gonna f*cking get shot.'

A video that’s now gone viral on Twitter refutes accounts of Phoenix, Arizona, police who claimed that they “feared for their safety” when they arrested a Black man and his pregnant fiancee last month.

Newly released video shows police screaming at the parents in front of their children and violently arresting the father, who has since been identified as 22-year-old Dravon Ames.

The bystander’s video, shared by journalist Meg O’Connor, shows a chaotic scene in a parking lot with multiple police officers.

"My hands are up! My hands are up!" 22yo Dravon Ames says as a Phoenix police officer yells to "get your fucking hands up." The same officer later says "You're gonna fucking get shot!"

Ames says the officers stopped him after his child walked out of a Dollar Store with a doll. pic.twitter.com/Nlkd7IXsyc

“Get your fucking hands off,” one police officer repeatedly.

“It doesn’t open,” the woman, identified as Ames’ fiancee Iesha Harper, is heard pleading while he continues to scream.

“Get your fucking hands off,” he screams again.

“I have two kids,” Harper is heard crying.

“I don’t give a shit, put your hands up,” says the officer.

A few feet away from them, Ames is seen being arrested by an officer.

“When I tell you to do something, you fucking do it,” the arresting officer is heard barking. “You’re not complying with me.”

“I am,” Ames says calmly. “I’m complying with everything you’re saying.”

“Shut your mouth,” says one officer, and it’s not clear if he’s the officer with Ames or Harper.

The commotion goes on for a few more seconds. Another officer is seen speaking with Harper until someone, who is likely the previous officer, comes and starts charging at her again.

“When I tell you to put your fucking hands up,” he starts screaming.

“I can’t put my hands up, I got a fucking baby,” she screams back. At this point, he proceeds to physically hold her, her child starts screaming, and the person behind the camera intervenes.  “Hey, hey, woah sir, calm down,” he screams from across the parking lot.

The incident took place after one of the children had allegedly shoplifted a doll from a store without her parents realizing it. The doll was later returned, and the store did not want to prosecute the family, ABC15 reported.

Another video shot from a different angle by a second bystander shows an officer pointing a gun at the car as a toddler comes out of the car and Harper carries another toddler.

Another angle of the incident filmed by a different resident of the apartment complex where Ames and his pregnant fiancee were dropping off their kids with a babysitter show a Phoenix police officer trying to yank the child from the mother's arms. pic.twitter.com/pTb07lZAXD

The woman behind the camera is heard offering to hold the kids, but the officers neither respond nor acknowledge her.

An officer, also seen toward the end of the previous video threatening Harper and physically holding her, is seen trying to snatch the toddler from Harper. The woman behind the camera directs another woman to take the kids from Harper. Harper, who is five months pregnant, is then seen being arrested by two officers and later escorted by two more officers.

The videos are in stark contrast to the accounts from the police, who had reportedly switched off their body cameras and claimed that they “feared for their lives” from the mother, Complex reported.

In his initial report, police officer Christopher Meyer failed to relay a number of key details, including Harper and the children being held at gunpoint and him kicking Ames before arresting him.

On Wednesday, the family filed a $10 million legal claim alleging the officers injured their 1-year-old child after snatching her from Harper’s arms. The parents claimed the girl couldn’t walk because the pavement was hot.

The notice of claim—the precursor to a lawsuit—also disputed initial statements by the police alleging that Ames wasn’t complying to their order and that an officer punched Ames for no reason.

Phoenix Police Department Chief Jeri Williams has said there’s an internal investigation being conducted, though it’s not clear if the officers are still on duty.

Phoenix Mayor Kate Gallego on Saturday released a statement and said she was “sick” over the video.

“It was completely inappropriate and clearly unprofessional,” the statement read. “There is no situation in which this behavior is ever close to acceptable. As a mother myself, seeing these children placed in such a terrifying situation is beyond upsetting.”

She said she was “deeply sorry” for the family’s experience and apologized to the community. She also said they’d accelerated the process of implementing body-worn cameras across all departments of the police.

Update 12:34pm CT, June 18: Phoenix police released security footage this week they say shows Ames shoplifting underwear from the store, Insider reported on Tuesday. The image video is unclear, however, and the Daily Dot was unable to independently verify the content.

New details have also come to light about Dravon Ames’ past. He faces two charges of aggravated assault against an officer in Tempe, Arizona, from Halloween 2018, when he tried to “kick and punch” officers several times when they detained him after he was in a crash, ABC15 reported. The officers tased and punched him then, according to the report, and he admitted to being under marijuana influence while driving.

His attorneys are claiming that he was abused and the charges were “fabricated” to cover it up.

The identities of the officers involved in the latest incident remain unknown, and it’s unclear if they knew about Ames’ prior arrest. But a Phoenix New Times report from earlier this month indicates widespread prejudice by Phoenix police. Officers from the department reportedly celebrated George Zimmerman’s acquittal for the murder of Trayvon Martin police and regularly refer to Black people as “thugs” in social media posts.

In a press conference on Monday, Ames and Iesha Harper called for the police officers involved in the incident to be fired.

“This feels like it’s a half-apology,” Ames said, according to the Washington Post. “The officers are still working. It’s just basically a slap in the face.”