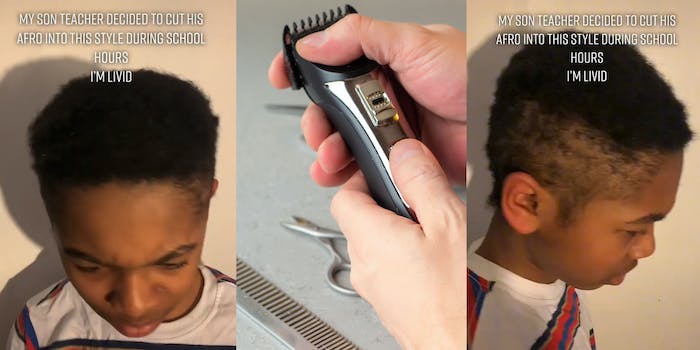 Black child’s teacher accused of cutting his afro off

'MY SON TEACHER DECIDED TO CUT HIS AFRO.'

A Minnesota-based parent claimed that a teacher cut their child’s hair off. Prior to the alleged incident, the child had an afro; now, the child has a closely cropped haircut.

Tadow (@tadowbaby) posted a video of the aftermath of the incident, showing the child’s short hair.

The video currently has almost a million views.

“MY SON TEACHER DECIDED TO CUT HIS AFRO INTO THIS STYLE DURING SCHOOL HOURS I’M LIVID,” the text overlay on the video reads.

It is unclear what actually led to the incident, but in comments section, Tadow said they reached out to the police.

“…A[n] officer told me it was miscommunication not assault or any criminal charges could be filed,” Tadow said. The charges could not be filed because their “12yr old son gave consent,” the parent said.

“Kids have to get permission from parents in ALL states to go on field trips and to participate in any functions at school or church,” one user said.

“Hes a child,” another said. “Teacher[s] are not allowed to do anything to kids without parents permission. don’t justify them… do something.”

Tadow said the police told them to “deal with it through the school.” However, Tadow said they weren’t informed of the haircut before it occurred, only after it had already happened.

“I never got a[n] email call or text about my son teacher cutting his hair,” they said in a comment.

There have been many news stories in recent years about children getting forcible haircuts in school.

In September of 2021, a Black Indianapolis student allegedly received a forcible haircut from his teacher after other students made fun of his hair. A similar incident reportedly happened in April of that year, in which a school librarian allegedly forcibly cut a biracial student’s hair. In 2018, a California teacher lost her job and received six criminal misdemeanor charges after allegedly pressuring a student into a haircut.

Tadow later claimed they were seeking legal representation and had pulled their child out of school for the time being.

“I thank those of you asking if he is ok [and] knowing this isn’t a joke,” they said in the comments section. “IF ANYONE HAVE ANY LEADS TO A LAWYER WHO CAN HELP ME I WOULD APPRECIATE IT.”