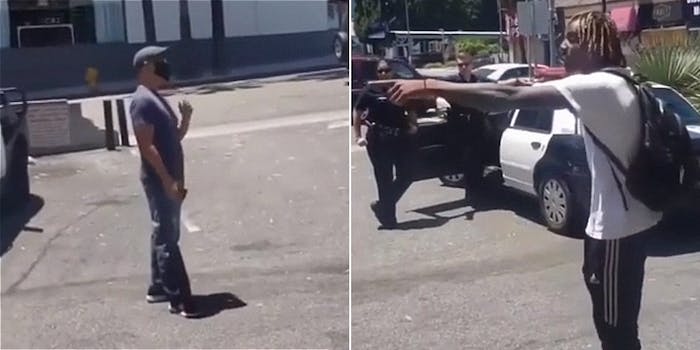 ‘Yeah, I am racist’: Black man goes off on Asian man and white cops

'On my momma, we need justice!'

A new video shows a Black bigot being racist toward an Asian American, hurling anti-Asian slurs during an argument happening right in front of the police. The cops aren’t let off the hook either.

The video, posted to Reddit’s r/PublicFreakout, shows a Black man already in some verbal confrontation with a man of Asian descent but soon turns his attention to the white cops. (Black people and other oppressed people can be racist; it’s complicated, but it’s true.)

At the start of the filming, the Black bigot tells him, “Man, what? Shut your Chinese ass up. Take your ass back to China.”

The police officer leaning against his car tells the Black man that the comment “sounded racist.”

“I am racist,” he quips. “Breonna Taylor, Omari… what’s his name, and George Floyd! This is my country.”

He points toward the cop, “Shut your white ass up!”

“Take your little ass back to China,” he continues, attention back to the Asian American.

“Y’all gonna kill me anyway,” he says, toward the cops.

Then he proceeds to raise the racism levels and tells the Asian American that he’s got the “smallest dick on the planet” and that he would “fuck his wife better” than the man.

Then it turns into a one-sided, racist game of dozens, where now he’s proceeded to talk about the Asian American man’s lack of hair. He tells him, “I’ll beat the shit out your little Chinese ass,” and “go make me shrimp rice, n***a.”

But there’s no chance of an actual confrontation as they get further and further apart.

However, he turns his attention back to the police officers, “Yeah, I’ll wish you would approach me; I’ll beat your ass, n***a. Yeah, fuck you, white boy.”

He challenges him to arrest him. The cop says he’s not doing anything to be arrested.

He waves off both the Asian American and the police and walks away.

Tirade over, one of the cops says, “Have a good day.”

The viral video sparked a discussion in the comments about whether Black people can be racist. Many sociologists argue that in the U.S., Black people lack the institutional power to be racist because racism is about prejudice and the ability to use that prejudice to inflict harm via public policy.

In his popular book, How to be an Antiracist, Ibram X. Kendi pushes back on this theory. “Every single person on earth has the power to resist racist policies and power,” he told CNN in 2019. “We need to recognize that there are Black people who resist it, and there are some who do not because of their own anti-Black racism. And then you have Black people, a limited number, who are in policy-making positions and use those policy-making decisions to institute or defend policies that harm Black people. If those people were white we would be calling them what they are: Racists. If they’re Black, they’re no different.”