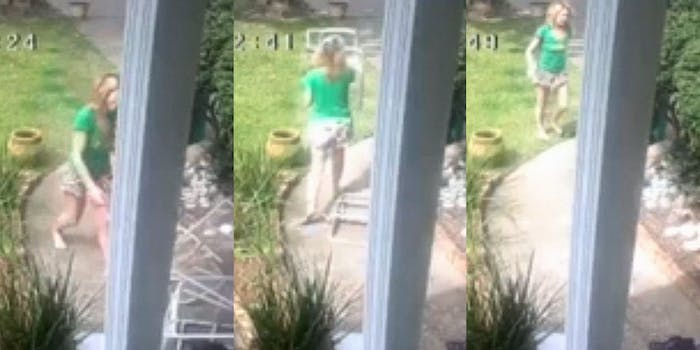 A wild video shows a Louisiana woman throwing a racist tantrum and hurling trash across her neighbor’s property after animal control seized her unvaccinated dog for allegedly biting her neighbor.

Redditor u/Kimstar504 posted the video to r/PublicFreakout yesterday. In the comments, she describes the situation that’s mostly unfolded by the time the video starts.

u/Kimstar504 says she called animal control to have her neighbor’s dog taken away after it attacked her. The video, which appears to be captured by a doorbell security camera, shows the neighbor’s subsequent temper tantrum.

The racist neighbor calls u/Kimstar504 the N-word as she tosses random items from her porch into the driveway. “She’s throwing out her own trash and tossing some of mine in the process,” u/Kimstar504 explains.

The neighbor also dares u/Kimstar504 to “call the fucking police.”

When one commenter suggested that u/Kimstar504 “should take her advice and call the cops” on the racist neighbor, she replied, “When I report her, she runs inside and refuses to answer the door. This woman manipulates the system. She has multiple offenses in the neighborhood. It’s insane.”

Elsewhere in the comments, u/Kimstar504 revealed, “The police are numb because this is a suspected meth house, but I think they use more than they sell! They have years of warrants and complaints, but someone has to DIE before people get removed.”

u/Kimstar504 says she and her neighbor have a court hearing next week. “Hopefully, the judge will help me at our hearing,” she writes. “I have months worth of footage.”