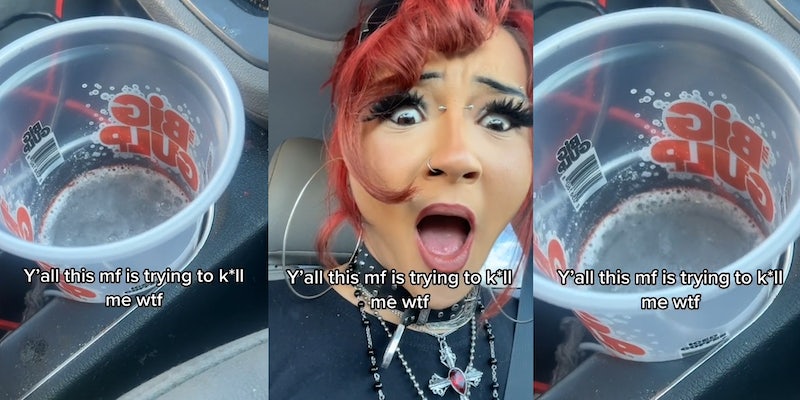 ‘I asked him to get me a Sprite from a 7-Eleven’: Woman speculates after noticing Big Gulp drink date got her fizzing

'He came back and handed me an ICELESS HALF FILLED FIZZING CUP.'

Whether going for a night out or going on a date with a stranger, our society has taught women to stay cautious and look out for red flags to avoid sexual assault. While nobody but the perpetrators are at fault if sexual assault occurs, there are preventative measures that are always repeated, like “stay in touch with your friends” and “don’t accept drinks from strangers.”

A TikToker clearly had the latter in mind while filming a bizarre incident that ended up going viral.

The video is only nine seconds long and shows user @sadisticbrae recording a topless Big Gulp cup, which is one-third filled with what she believes is Sprite. It’s sitting in a car cup holder and fizzing uncontrollably.

Her date, the one who allegedly handed her the drink, is standing outside the car as the video is accompanied by a viral audio clip of a voice, saying, “Yep and you’re going to jail” and overlaid text: “Y’all this mf is trying to k*ll me wtf.”

Viewers were distraught by what they assumed was footage of an attempted drugging and went to the comments section to voice their concerns. “Plsss do not drink that omg,” one commenter said.

Other commenters were worried about the lack of updates from the TikToker. “Girl it’s been an hour are you okay like fr,” one said.

“ITS BEEN TWO HOURS BESTIE WHATS UP???” another commenter asked.

This prompted @sadisticbrae to post a follow-up TikTok the following day.

In it, she offers an update and gives context as to what happened before and after video. “We were driving to go on a shopping date and I asked him to get me a Sprite from a 711 because my stomach hurt and he came back and handed me an ICELESS HALF FILLED FIZZING CUP then got out of the car to pump gas with no explanation,” she said.

She claims her date told her he got her water and an Alka-Seltzer because he thought it “would work better.”

“It might’ve been just that but I wasn’t ready to take that chance so I said my stomach was feeling better and he DRANK IT INSTEAD?!” she added.

Commenters applauded @sadisticbrae for refusing the drink but also pointed out the likely reason her date ended up drinking it. “He drank it just to make you feel better, he knew what was going through your head,” one said.

The Daily Dot has reached out to @sadisticbrae via TikTok comment.