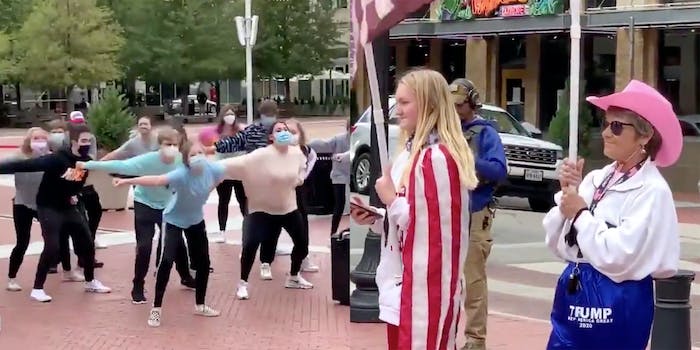 This Biden vs. Trump supporters dance-off isn’t quite as advertised

In case you haven’t had your fill of pre-Election Day dance videos, there’s a new one making the rounds. It’s billed as a Biden vs. Trump supporters dance-off video … but the “joke” appears to be that only the Biden side is dancing.

The video got a signal boost on Monday from Rex Chapman, the basketball player turned social media personality. Attributed to Twitter use Theo Shantonas (@TheoShantonas), Chapman signal boosted it to his audience of nearly a million followers.

The tweet announces “It’s a dance off” and positions it as between supporters of the two primary presidential candidates. The 16-second video embedded in the tweet pans between a group of dancers moving to Michael Jackson’s “Thriller” and a few assorted Trump supporters who are hardly moving at all.

The dancers are all wearing protective masks—perhaps leading Chapman to assess that they were Biden supporters.

Respondents chimed in with comments, with some of the best ones surmising that maybe the Trump supporters wanted to switch sides.

Others spotted one of the Trump supporters using the flag as a cape and went on flag patrol.

But there were some who gave it up for Team Presumably Biden.

And how is the performance itself? They’re holding their own, but our favorite election-related dancing of the last few days belongs to the Philadelphia voters who did the Cha Cha Slide in line while waiting to make their voices heard.